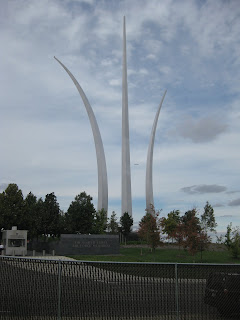 This memorial was originally going to be placed on a site just down the hill from the Netherlands arillon on Arlington Ridge. Fund raising and detailed designs began. However, because the site was near the US Marine Corps Memorial (better known as the Iwo Jima Memorial), Congressman Gerald Solomon, a Marine veteran, introduced a bill to prohibit the construction of any momument, memorial, or other structure "within view" of the Iwo Jima Memorial.
Faced with the cost of litigation and the opposition of prominent Marine veterans in Congress, the Foundation agreed to move the Memorial to its present site on the grounds of Fort Myer just south of Arlington National Cemetery. 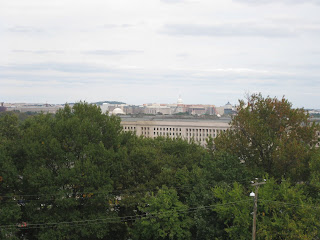 The Memorial itself is 270 feet high and appears to be soaring; its array of stainless steel arcs against the sky evokes the image of the Air Force Thunderbirds as they peel back in a precision 'bomb burst' maneuver." Only three of the four contrails are depicted, as the absent fourth evokes the missing man formation traditionally used at Air Force funeral fly-overs. It also symbolizes the core values of the Air Force - integrity first, service before self, and excellence in all we do. 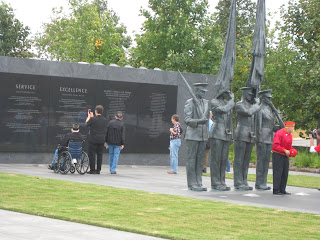 At the entrance from the west stands four eight-foot tall bronze statues of the Memorial’s Honor Guard.

It is also fitting that at the top of one of the spires, an Eagle has built it's nest. 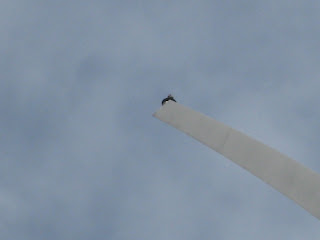