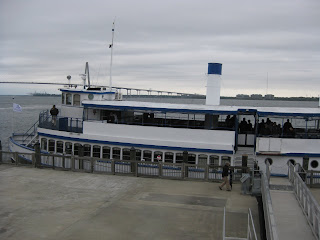 We took a boat tour to Fort Sumter where the bombardment of the fort was the first military action of the Civil War. (As you can see, it was a cold, rainy day. But that doesn't stop us tourists.) 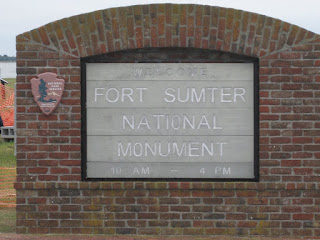 April 12, 1861 is the day that will forever be remembered as the opening day of hostilities between the North and South of the United States. This date marked the beginning of the bloodiest war in US history that would be called The Civil War, The War Between the States and even The War of Yankee Aggression. On the eve of the Civil War, one of every 7 Americans belonged to another American. Nearly 4 million men, women, and children were slaves. 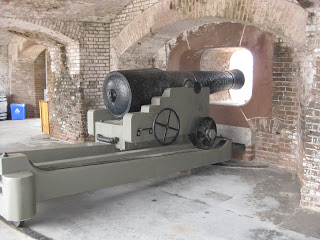 The first shots took place at Fort Sumter, between Union Major Robert Anderson and Confederate Brigadier General Pierre G. T. Beauregard. (Side Note: Major Robert Anderson was Brigadier General Beauregard's artillery instructor at West Point in 1838.) They may have been the first shots but they had been a long time coming.
As far back as the Declaration of Independence in 1776, slavery and states rights were issues. The early fight for State’s Rights began in South Carolina in the 1820s. John Calhoun wrote about “Nullification.” The point of nullification was to give states the right to nullify or void, any acts by Congress or the Federal Government that transgressed upon ANY right the state considered its own. 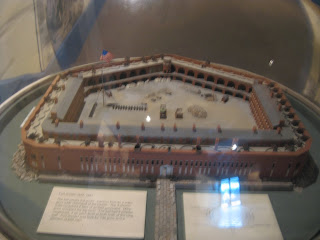 Then came the election of 1860 when Abraham Lincoln was elected president without the majority vote. This Republican President from Springfield, Illinois was the eventual catalyst for the secession of the Southern states.
On December 24, 1860 South Carolina officially seceded from the Union. The first meeting of the Confederate Congress was held at Montgomery, Alabama on February 4, 1861. Jefferson Davis of Mississippi was elected President and Alexander H. Stephens of Georgia was Vice President. 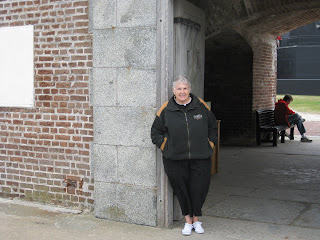 Six days after South Carolina seceded, Major Anderson secretly moved his men to Fort Sumter. South Carolina authorities considered this a breach of faith and demanded that the fort be evacuated. President James Buchanan refused their demand. Both sides believed that the first side to use force would lose precious political support in the border states. Finally Brigadier General Beauregard demanded that the Union forces surrender and he cut off the food supplies to the fort. President Lincoln informed the governor of South Carolina that he would be sending supplies to the fort so the Confederate Cabinet issued the order for the attack on the fort to ensure the surrender before provisions could arrive. 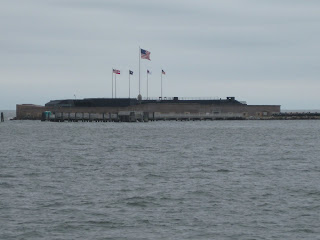 On April 11, Gen. Beauregard delivered an ultimatum to Maj. Anderson. In it Beauregard specified that he would facilitate the removal of weapons and supplies from the fort, send personal items to any location desired but Anderson was to evacuate Sumter immediately. Major Anderson replied that his honor prevented him from doing so.
At 3:20 am on April 12, 1861 Confederate officers gave written warning to Maj. Anderson that h firing would begin upon Fort Sumter in one hour’s time. At 4:30 am, Capt. James stationed at Fort Johnson fired the signal gun that told the other batteries to begin firing upon Sumter. The first shot of the Civil War did not hit anything. It was simply a signal. Each of the surrounding batteries quickly joined in but the Union guns didn’t return fire until 7:30 am. 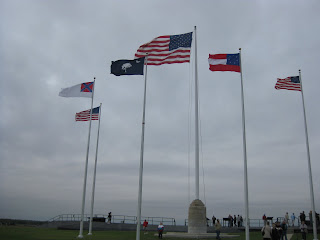 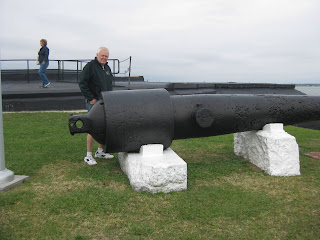 Firing continued through the day and night of April 12th and on into the morning of April 13th.
It was at this time the flagstaff of the fort was shot down and the barracks were on fire. In a strange sense of duty, honor or irony, the Confederates sent Capt. Lee, Roger Pryor and William Miles out towards Fort Sumter in a boat. When they were almost there, a new flag and flagstaff were raised. Deciding to turn back, they once again halted when a white flag of truce was raised.
The Confederates had come to ask Anderson if he needed assistance in putting out the fire. Anderson had only lowered the flag to find out what the men in the boat had wanted. Once the question had been asked, Maj. Anderson politely refused the offer and assured the Confederates his men were well able to handle the situation. 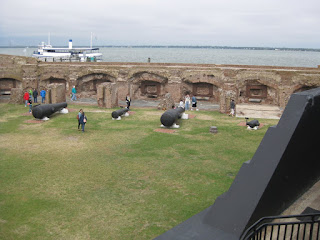 It would take two more attempts before Major Anderson would finally agree to the terms and surrender the fort. On April 14 he personally lowered the flag and evacuated the fort on steamers provided by Beauregard. Of the approximately five hundred and eighty men who participated on both sides at Fort Sumter, not a single life was lost.
For those who enjoy a nice piece of trivia, the United States flag would remain down from Fort Sumter until the fourth anniversary of its lowering, April 14, 1865 when General Robert Anderson, the previous Major Anderson personally raised it once again.
Posted by Jim and Sandie at 3:23 PM