Richmond is one of the most historic cities in the USA. Philadelphia and Boston rank up at the top also. Richmond was pivotal during both the Revolutionary War as well as the Civil War. In 1780 Virginia’s state capital was moved from Williamsburg to Richmond. 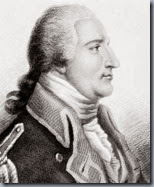 On January 4, 1781, Brig. Gen. Benedict Arnold landed British troops at Westover, VA and began marching towards Richmond. When Governor Thomas Jefferson heard this news he started removing public records and military supplies to safety before evacuating the capital. On January 5, Arnold’s troops easily occupied Richmond for 24 hours. Before returning to Westover, the British burned it to the ground. (picture from the Library of Congress) 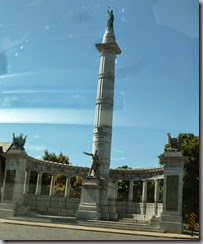 Jefferson Davis Monument. He was the only President of the Confederacy. The pictures were taken as the vehicle was moving but you can check out better pictures on the web.

Between 1800 and 1865, an estimated 300,000 to 350,000 slaves were processed through the Shockoe Bottom slave auction blocks in Richmond. Shockoe Bottom also served as a burial ground for thousands of Africans that did not survived the journey. 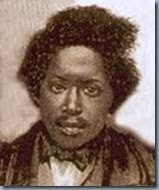 In one of the more creative and dangerous escapes by a slave in the mid-1800s, Henry “Box” Brown, with the help of a sympathetic white shoemaker, Samuel Smith, had himself nailed into a two- by three-foot box labeled “dry goods” and was loaded onto a northbound train from Richmond to freedom in Philadelphia. 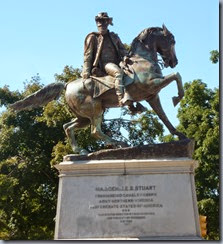 J.E.B. Stuart monument. He was considered to be one of the greatest Calvary commanders in America.

In 1861 Richmond became the capital for the Confederate States of America. When victory was obvious for Ulysses S. Grant at Petersburg in April 1865, Confederate President Jefferson Davis abandoned Richmond.

Matthew Maury Monument. He was known as the ""The Pathfinder of the Seas",because of his writings about sea navigation, oceanography and meteorology. He is credited with inventing the electronic torpedo. 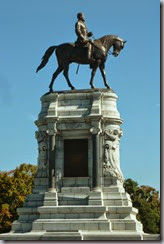 Robert E. Lee Monument. He was a brilliant strategist and led the Confederates in the Seven Days Battle and the Battle of Chancellorsville.  He fought at Gettysburg and eventually surrendered at Appomattox Court House on April 9, 1865.

Monument Avenue which was established in 1877, was erected to honor important Confederate figures. Thanks to Tom as our chauffeur we were able to drive the Avenue and view the statues of these famous men. 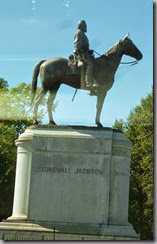 Stonewall Jackson Monument. Jackson was given his nickname at the first Battle of Manassas, "standing like a stone wall." Jackson died at age 39, as a result of "friendly fire" at Chancellorsville in 1863, after some of his own men mistook him in the darkness and shot him. 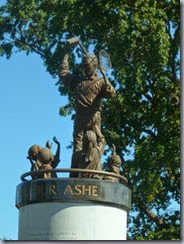 Arthur Ashe Monument. The decision to place his monument here was very controversial and became a focal point of racial tensions in Richmond. Some people said it was inappropriate for Monument Avenue which contained only statues of men with a connection to the Confederate States of America. The supporters of the monument cited Arthur Ashe’s place in the modern history of the city. His statue is much smaller than the other monuments and is also the only one which faces away from the center of Richmond.

After exploring Monument Avenue Tom introduced us to some of the best BBQ ever. We went to Buz and Ned’s for lunch. Pulled pork sandwiches, apples and beans – delicious. Now we really want to try their ribs.