THE PLACE WHERE THE WHITE HORSE WENT DOWN 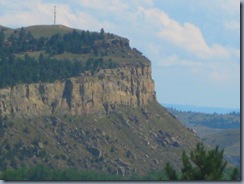 In 1837 a smallpox epidemic spread through the Crow tribe in Montana. A story is told of two young warriors returning from a war expedition found their village stricken with the disease. One discovered his sweetheart among the dying and both warriors were grieving over the loss of family and friends. They became very despondent and frustrated over their inability to do anything to save their village. They dressed in their finest clothing and mounted a snow white horse. Riding double and singing their death songs, they rode the blind-folded horse over this cliff. Several teenagers who were not afflicted witnessed the drama, buried the warriors and left the area.