I thought this story was great. My kind of guy. (Notice Lincoln’s tomb in the back of the picture.) 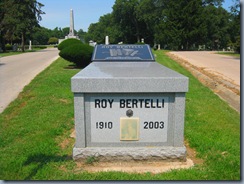 Oak Ridge Cemetery, home of Lincoln's Tomb, is a regal burial ground -- the dignified final resting place of some of Illinois' most blue-blooded citizens.

Or at least it was, until Mr. Accordion showed up.

Mr. Accordion was Roy Bertelli, "a rare individual". Roy had always dreamed of being buried in Oak Ridge, but he figured that the odds of it happening were next-to-impossible. One day he summoned up his courage and went to the cemetery to ask about a burial plot. To his amazement, one was available, on a tiny triangle of land right next to the road leading to Lincoln's Tomb! Roy bought it on the spot, and went home a happy man.

A couple of weeks later, however, Roy received a letter from the cemetery. There had been a mistake, it said; the plot had been sold to him in error. Roy was pondering what to do next when a second letter arrived, this one from the cemetery's lawyer. It said that the cemetery intended to seize the plot, and would take Roy to court if he tried to fight back. 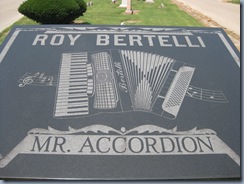 That was a bad move by Oak Ridge Cemetery. Roy would have returned the plot if he hadn't been disrespected (Roy was a WW II veteran, the generation that learned that when faced by a superior but unjust force, to say "Nuts"). Roy was really angry, and he decided to teach the cemetery and the city of Springfield a lesson. First, he built his crypt above ground, impossible for any Lincoln Tomb tourist to miss. Then he erected a large, elevated tablet behind it, engraved with a big accordion over happy musical notes. "Roy Bertelli, Mr. Accordion" it read. Roy would periodically visit his grave, stand on top of his crypt and play his accordion, to the bafflement of cemetery visitors and the horror of the city.

Roy Bertelli died in 2003. As a final flip to the powers-that-be, he kept the Oak Ridge Cemetery crypt, paying for its perpetual care, but had himself buried in another cemetery east of town.