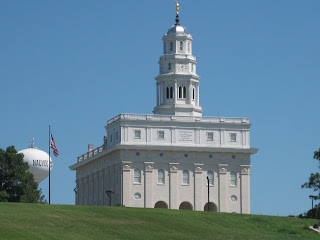 This is what happens when you don't stop to think about your blog readers. I got a comment from Margie on my previous blog post asking me what this building is.
That made me realize that I just assumed everybody would know what the building is and that's what happens when you assume something.
This building is the Nauvoo Temple belonging to the Church of Jesus Christ of Latter-day Saints (Mormons). The original temple that Joseph Smith and his people built was destroyed by fire and a tornado after the Saints were run out of Nauvoo. In the early 2000's the Church was able to rebuild the temple to the exact specifications of the original temple. It was dedicated in 2002.
President Boyd K. Packard explains the purpose of temples. "The ordinances and ceremonies of the temple are simple. They are beautiful. They are sacred. They are kept confidential lest they are given to those who are unprepared. Curiosity is not a preparation. Deep interest, itself, is not a preparation. Preparation for the ordinances includes preliminary steps: faith, repentance, baptism, confirmation, worthiness, a maturity and dignity worthy of one who comes invited as a guest into the house of the Lord."
Temples are different from our regular meeting houses because of the sacred ordinances that are performed in them. Marriages are performed for eternity in temples as well as baptisms for the dead. Mormons believe that life and families are eternal (not just for this world) and that everyone who has ever lived needs to be given the opportunity to have this eternal life.
Thanks Margie for giving me the opportunity to share some information about temples. There are currently 133 temples being used around the world.
Posted by Jim and Sandie at 6:54 AM