Carthage is the site of the jail where Joseph Smith and his brother Hyrum were martyred by the anti-Mormon mob. 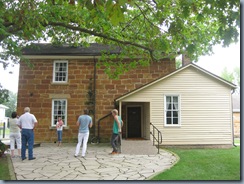 Trouble for Latter-day Saints began when the Nauvoo city council issued orders to destroy a newspaper press that had printed criticisms against the Church. This act angered the newspaper's supporters and neighboring citizens.

Those in opposition rioted in the streets of Nauvoo in protest of the act. City council members, including the Prophet Joseph Smith and his brother Hyrum, were arrested for instigating a riot. To bring calm, Governor Thomas Ford promised the council members full protection if they would submit to arrest and go to Carthage for a trial. Notwithstanding the promise of protection, Joseph Smith felt that he was "going like a lamb to the slaughter."

The 16 council members arrived at Carthage on 24 June 1844. The next day they were released on bail, but Joseph and Hyrum Smith were detained after being falsely charged with treason, a charge stemming from their activating the Nauvoo Legion to protect the citizens of Nauvoo. Although only Joseph and Hyrum were under arrest, others remained with them in the jail.

On 27 June 1844, four men were held in the jail's upper bedroom: Joseph, Hyrum, John Taylor, and Dr. Willard Richards. They noticed a large group of men with disguised faces and guns rush toward the jail. The four men tried to hold the door against the mob, but Hyrum was immediately shot and killed. The mob forced the door open just as Joseph turned to leap out of the window, perhaps to distract attention from his friends. He was shot twice in the back and twice in the chest as he fell from the second-story window. John Taylor was shot four times but miraculously survived. Willard Richards escaped without even a hole in his clothing. 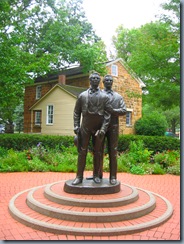 The jail was constructed in 1839-40. In later years it was converted into a house. It remained a private home until 1903, when The Church of Jesus Christ of Latter-day Saints bought it. The Church restored the building in 1938.