Our friend Steve suggested that we go to this museum and I am so glad he did. It is so well done and completely fascinating. 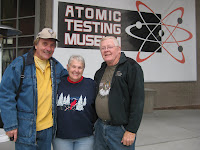 Las Vegas is famous for its bright lights and, of course, gambling, nightlife and overall accessibility of all things sinful. But, once upon a time, Vegas was also famous for the well-known secret of atomic testing that occurred 65 miles outside of town.

In the 1950s, visitors would travel to downtown Las Vegas to view the mushroom clouds that would rise from the Nevada Test Site (NTS). The site was the nation’s premier nuclear testing facility and operated from 1951 to 1992.

The NTS was established by the United States Department of Energy because military officials knew little about the effects of nuclear weapons. The site was home to atmospheric testing until 1962 when, fearing fall-out dangers, operations were moved underground.

A total of 928 announced nuclear tests took place, with 828 of them being underground.

This important part of history is preserved at the Atomic Testing Museum in Las Vegas. The museum was established in order to preserve the legacy of the NTS and to promote public accessibility and general knowledge about the site. 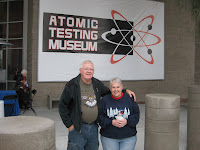 The Ground Zero Theatre is a definite must do for anyone who remembers the days of the "duck and cover" drills.
Posted by Jim and Sandie at 11:31 PM