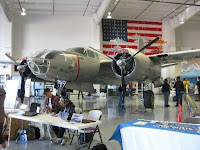 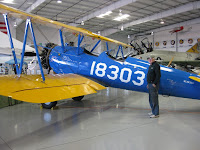 The Commemorative Air Force Museum put on a show today and we couldn't pass that up. 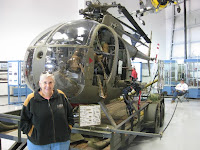 My brother-in-law, Don, was in the Air Force and it was so fun to have somebody with us who could tell us all about the different planes and talk about his experiences. And the icing on the cake were the cars that showed up. I picked out two of them that I hoped the owners would just give me. Didn't happen but I sure can dream. 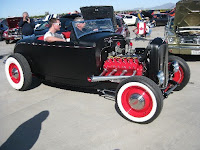 This young man was such a cutie. He was so proud of his police uniform and bomber jacket. This is my sister paying her ticket. 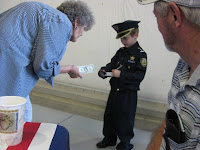 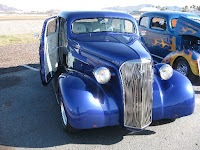 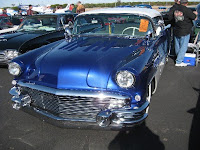 Look at that beautiful paint job. 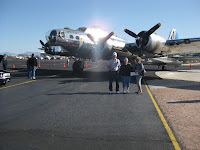 The most memorable part for me, though, was the B-17 "Sentimental Journey". It was built by Boeing in 1943 and 1944 and served in the Pacific. 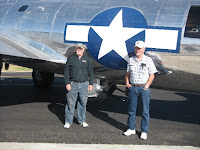 There were 12,731 B-17's built during WW II and there are only 7 left flyable in the world. This is one of them. The reason this is so personal to me is because my Mom helped to build these planes. She was a "Rosie the Riveter" and worked for Boeing in Seattle while Dad was over seas. 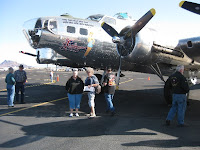 The term "Rosie the Riveter" was first popularized in 1942 by a song of the same name written by Redd Evans and John Jacob Loeb. The song was recorded by numerous artists, including the popular big band leader Kay Kyser, and became a national hit. The song portrays "Rosie" as a tireless assembly line worker, doing her part to help the American war effort.

All the day long,
Whether rain or shine
She’s part of the assembly line.
She’s making history,
Working for victory
Rosie the Riveter
Posted by Jim and Sandie at 4:30 PM