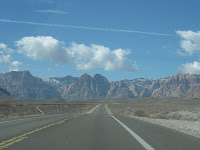 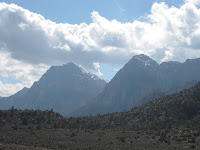 About 600 million years ago, this area was located under a deep ocean basin. Sediments up to 9,000 feet thick were deposited, and eventually lithified (consolidated) which means that a sand dune becomes compacted and hardened. 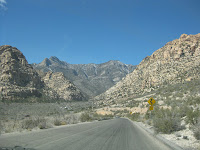 Once in this form, water passing through the rock can carry and deposit minerals, which can alter the color of the rock. 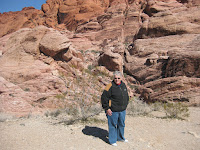 Around 250 million years ago, the earth's crust started to rise forcing the water out and leaving behind formations of salt and gypsum. This exposure of the former sea bed allowed some of the rocks to oxidize (literally rust) and formed the area's red and orange rock layers. 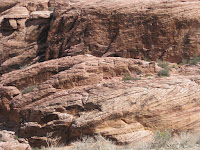 By 180 million years ago, the area became a desert featuring vast expanses of huge shifting sand dunes. As the wind shifted these dunes around, old dunes were leveled and new dunes settled on top of them creating the lines and layers that you can see in the rocks today. This formation is known as Aztec Sandstone. 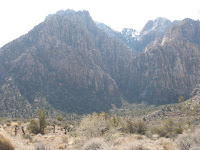 The most significant geologic feature of Red Rock Canyon is the Keystone Thrust Fault. The Keystone Thrust is part of a large system of thrust faults that extends north into Canada and began to develop approximately 65 million years ago. A thrust fault is a fracture in the earth's crust that is the result of compressional forces that drive one crustal plate over the top of another. 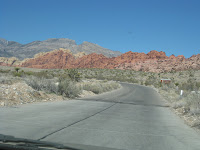 This results in the oldest rocks on the bottom of the upper plate resting directly above the youngest rocks of the lower plate. At Red Rock Canyon, the gray carbonate rocks of the ancient ocean have been thrust over the tan and red sandstone in one of the most dramatic and easily identified thrust faults to be found and formed the red line that can easily be seen today. 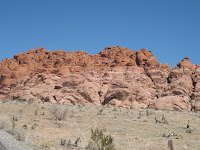