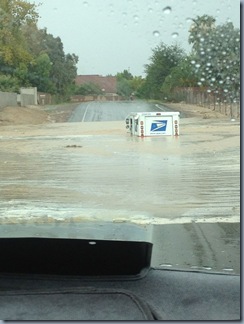 This picture is from the news station here in Las Vegas. They said that 50 people needed to be rescued.

Well! What an experience this was today. We’re at the Road Runner RV Park. Had some rain this morning but it was mostly just a long ride.

Vet appointment at 2:00. At 1:15 it started to rain. But it didn’t just rain, it RAINED!!!!!! I have never seen the water run like it did today. They said on the news tonight that they had over 2” of rain in less than two hours. It was incredible. I was certainly happy we had the high clearance vehicle. The streets were flooded and people were getting stranded in their cars. It was coming down so hard you couldn’t see which lane you were in or what the street signs said.

We left for the Vet’s just as it was starting to rain. Should have taken us about 20/25 minutes. At 2:00 I called the vet’s office and told them we were trying to get there. Took us over an hour. Because of the RAIN!!! 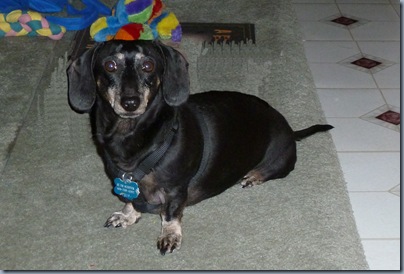 Scooter’s back is better today unless she happens to twist the wrong way. She is on an anti-inflammatory, a muscle relaxant, and a pain pill for the next week with restricted movement. Back issues are a problem for doxies with their long spines. They also have very shallow joint sockets which can cause more problems.

The rain has moved on and tomorrow morning, so will we.