Scooter is doing much better. Good meds can do that for you. Her hind legs still won’t work to help her up the stairs but that’s okay. She’s learned to wait for us to lift her up. They work just fine coming down the stairs and also when she’s out chasing critters. She still isn’t back to feeling great but she isn’t in any pain most of the time and that’s a good thing.

I used to spend time in this part of Nevada when I was much, much younger. I had three friends (well more than that but these are ones that belong in this story) and we spent several years together. There was my roommate, Rose; my classmate from business school, Steve (I’ve written about him before – he lives in Las Vegas and we sometimes park in his driveway); and our friend, Phares.

Phares is from this area of Nevada. We would often take the train out of Salt Lake City, get off in Caliente and spend week-ends exploring this area. 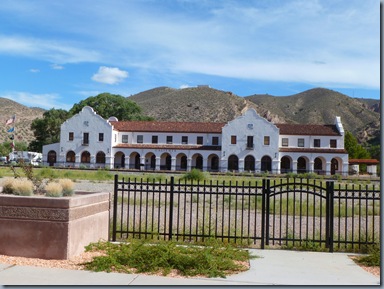 I haven’t seen Phares is probably 30 years and the last I had heard, he was a Ranger in Nevada. He was raised in Panaca, so my wonderful husband stopped at the grocery store there and asked the clerk if she knew Phares. She said the last she knew he was living in Caliente. I was ready to give up but not Jim. Back in Caliente he went in the hardware store and found a clerk that knew him and the general area he lived. Also knew he drove a green Ford Explorer. We drove around and around looking for the vehicle with no luck.

Jim stopped a guy on the street and he had only lived in Caliente for two years so no go. We drove around another block (Jim’s doesn’t believe in giving up) and there was another gentlemen walking down the sidewalk. Jackpot! He pointed two houses down the street and told us to go around to the back door.

Yes! We found Phares. However, he had a terrible cold and looked miserable so I didn’t bring out the camera. Hopefully when we get back through this way again he’ll feel much better. Had a short visit and now have his phone number.

We also visited Pioche and Cathedral Gorge, but that will be a separate post. 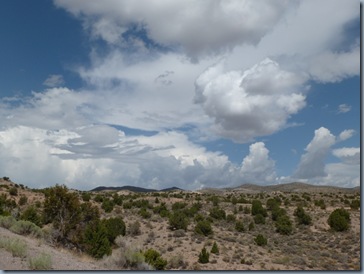