THE COWGIRL AND THE RODEO 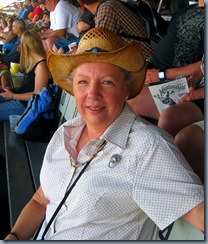 Carol and Doug arrived in Billings a week ago. We first met them last year out in Washington. They followed a few days behind us up the coast and eventually we stayed put long enough for them to catch up. Really enjoyed meeting them and were so looking forward to getting to actually spend some time visiting. (Love the cowgirl hat)

Since Jim and I were busy with the move into the fifth wheel, Carol and Doug did a lot of exploring on their own. But we did get together for a couple of dinners. 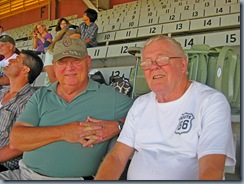 And the rodeo!!! The fair was in town and Carol and Doug fell in love with rodeos when they spent some time in Cody, WY. Thursday night we met them at the fairgrounds.

What a great time. However, this is probably the first rodeo I’ve been to where the animals won hands down. Since I grew up in Montana, rodeos have always been a part of my life. And normally the cowboys do a pretty good job of riding and roping and wrestling. But Thursday night, the cowboys had a really tough time. Those who made it to the whistle really didn’t have very good scores and in the bull riding, only one guy actually made it for the full 8 second. 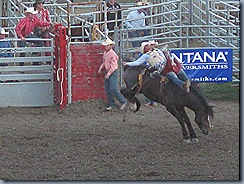 The barrel racers at least stayed on their horse and most of them made it without knocking over barrels. The trick riders did a great job also. But the poor cowboys. Good thing most of them look good in them there jeans. 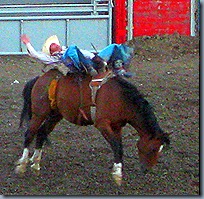 My pictures really turned out lousy because it’s really hard to take a picture of bucking, jumping, running, and spinning animals and cowboys. I’m only sharing a couple with you so your eyes won’t cross too bad. 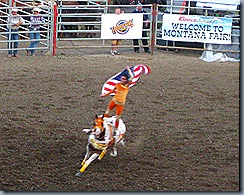