I’ve been feeling lousy the last couple of days. Mulberry Trees are in bloom and I’m sure they are the culprit. I had a sore throat, lost my voice, and my nose has been running like a faucet that won’t shut off. I spent yesterday whining in a whisper to Jim until he couldn’t stand me anymore and went down to a casino for awhile. Today the voice is back, throat is okay, but the nose still won’t quit.

I finally worked up the energy to take a shower and then decided I wanted to go out for dinner. We couldn’t decide what we wanted to eat. You know how that goes, nothing quite sounds like what you really want. Jim finally decided he wanted some fried chicken (not KFC or Popeye's or anything like that). 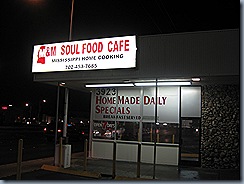 I got on line and found some good reviews for M & M Soul Food Cafe and off we went. The reviews were right on. We started off with corn fritters that were to die for. I don’t particularly like corn fritters but these was beyond good. 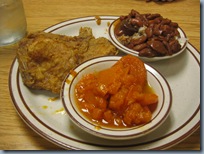 Jim ordered the fried chicken and I ordered the pork chop. For our sides we chose yams, red beans and rice, green beans, rice with gravy and cornbread dressing. The only thing that we wouldn’t order again was the cornbread dressing. The yams and green beans were by far the best. I would go back and just order sides even though the pork chop and chicken were also good. 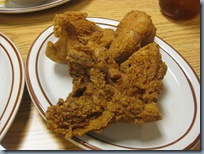