Monday morning the weather was looking rather dreary so I called Jeri to see if they wanted to make a visit to the Ethel M. Chocolate factory in Henderson. Never heard of Ethel M. chocolates before and thought it could be an interesting outing. 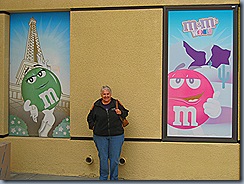 Forrest Mars, son of the founder of the MARS Candy Corporation which makes M&M’s and Mars bars among many others, retired In 1981 and moved to Henderson, NV. There he created Ethel M Chocolates to honor his mother by creating a line of gourmet chocolates that reminded him of how he learned about quality chocolate making. 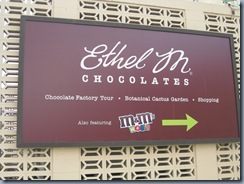 He created the Mars candy bar in 1933 while living in England. When he returned to the United States, he developed M&M’s in 1940. The M&M’s were modeled after a candy that he had discovered while living in Spain. I couldn’t believe that those candies had been around that long. He was also responsible for launching Uncle Ben’s rice. 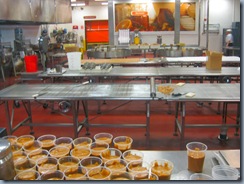 The factory was not very busy when we were there but they were getting ready to make caramel apples and we got to watch them spread out their pecan brittle. The factory has a series of pipes, conveyer belts and tanks that hold 20,000 and 35,000 gallons of chocolate. That’s a whole lot of chocolate. At the end of the tour you got a small sample of their wares.

None of us bought any of the chocolate which was quite expensive. I much prefer Hershey’s milk chocolate or my very favorite, Brach’s Peanut Clusters. 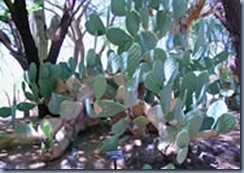 The cactus garden that is outside the factory was nice and I’m sure it would be beautiful when it is in bloom or at Christmas time when they put lights all over the cactus.

The whole tour only took maybe 15 minutes at the most but we knew there was a storm moving in with predicted wind gusts of 50 mph. We figured we should head home in case we needed to pull in slides.