We finally got to take our tour this morning. Thank goodness we’re retired and flexible with our plans.

We picked up Judy, Don and Paul once again and headed to the University of Phoenix stadium. This stadium is where the Arizona Cardinals play their home games. 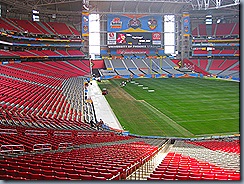 Here are some other facts about the stadium. I couldn’t remember most of the facts that Cheryl gave us during the tour but I was able to find most of them on line.

The stadium features the only rollout field AND retractable roof in North America. Dallas now has a rollout field with their new stadium. The field was rolled in while we were there because of the Fiesta Bowl last week-end and the BCS game this next Monday night. 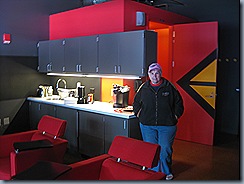 This is one of the luxury lofts.

Approximately 63,400 permanent seats, expandable to 72,200 seats. It had the extra seats in place during our tour because of the BCS game. 88 luxury lofts, approximately 7,400 Club Seats, Two 39,000 square foot Club Lounges

10 elevators and 18 escalators for public use. If you have a luxury loft, you, of course, have four private elevators to your seats. The exterior is supposed to represent a barrel cactus. I just don’t see it. We took a vote and we think it looks more like Jiffy Pop. Remember those? 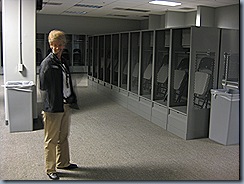 We weren’t allowed in the Cardinals locker room but we toured the visitor’s locker room. Not very fancy. 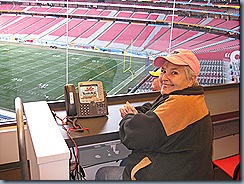 This is the press room. Everybody on the tour thought this would be a great place to watch the game from. Of course, this was before we got to see the luxury box seats. 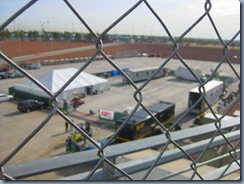 The grass field rolls out of the stadium on a 18.9 million pound tray, residing outside of the stadium except for football and soccer events. This picture shows where the field resides when it is outside. If work needs to be done on the watering system or the rollers, they have a “jiffy lube” type area where the engineers can work under the field.