WELCOMED VISITORS (AND A FEW NOT SO WELCOME)

The desert is a very active community. At one point we had 18 rigs in our group. It was hard to keep track of them because people would leave and new people would move into their spot.

We had some rigs parked near us that didn’t belong to our group but their owners dropped by to say hi and visit for awhile.

We also had a problem with people driving through our campsite. Not only did they drive ATV’s and bikes through, but also cars, trucks and RV’s. Just amazing to me because we were parked in a U shape so it was quite obvious that the road ended before it got to us. But it didn’t stop them. Terry put up some orange cones at the opening to the U but the wind kept blowing them away.

We also had one couple who forgot to read the most current directions for getting to our site and ended up stuck in the sand. But the people in our group rode to the rescue and were able to get them out and lead them back to where they belonged. The funny thing about that is their last name is Sand. 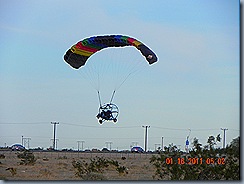 We had Para-sailors who flew over our site and waved to us. Delcie was very sad because they didn’t land and give her a chance to go for a ride with them. 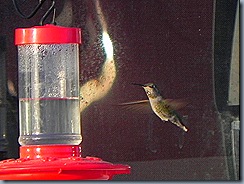 Also, out in the middle of the desert, we had some hummingbirds. Jim tried several times to take pictures of the one that seemed to like our feeder the best. But every time the camera came out the birds would disappear. I wish I could show you his beautiful bronze colored neck that absolutely glowed in the sunlight. He was shy, I guess.