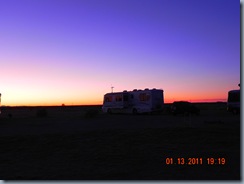 That’s right, sunrise. Not sunset. At least not this time. It’s really hard to believe that we were up early enough to get these pictures, but it does happen occasionally. 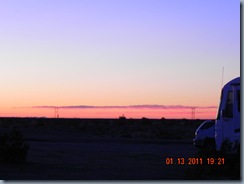 We had some really bad wind a couple of nights while we were on BLM land. Everybody was up at 3:00 a.m. making sure the chairs were all folded up so they couldn’t blow away, that awnings were in, and the fire was out.

We also pulled in our big slide cause we were rocking pretty good. Nothing like we had in Quartzsite last year though when we had those 70 mph winds and rain.

All in all the weather was beautiful the second week we were there.