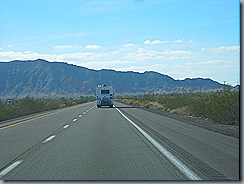 Jim plans on doing some fishing at Martinez Lake which is between Yuma and Quartzsite, so I drove the truck and towed the boat following behind the motor home.

It was a beautiful day for traveling even though it got off to kind of a rough start. We had been sitting in Apache Junction for seven weeks and our coach battery needed to be charged and all of the coach tires needed to be pumped up. So we were a little late getting out of town. 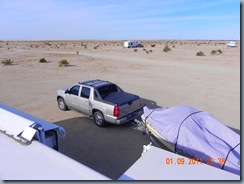 But we finally made it to our Reunion Site. The actual address is Winterhaven, CA but Yuma is right next door to Winterhaven and better known so we usually call it the BLM out of Yuma.

Toni and Doug had arrived shortly before we did and after some looking around, we found a spot that should work out really well for the reunion. 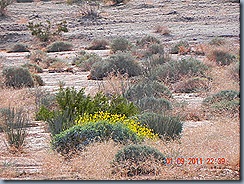 Several people are already in Yuma but they are in RV Parks in the area. Hopefully some of them will come out and join us this week. 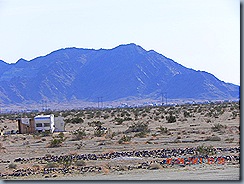 Jim had to go up on the roof to fix the TV antenna so while he was up there I had him take some pictures of the area. As you can see, we have lots of room available.