ON THE MOVE AGAIN

Tuesday morning we had to say good-bye to Jeri and Terry and head towards Montana. 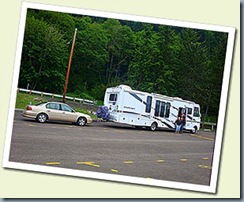 Even though it’s exciting to be on the move again, it’s hard to say good-bye. The good news is, we’ll see them again for sure in Yuma next January. (Thanks for the picture Jeri.)

Jim wants to meet up with a couple of fishing buddies at Fort Peck around the 10th of June. Hopefully he will have better luck catching there then he did in the Columbia River.

Tuesday night we spent in a Wal-Mart in Hermiston, OR and tonight we are at the Northern Quest Casino near Spokane. Should be in Billings on Sunday.