The camp hosts at the RV park let us know that we were going to have a potluck on Sunday during Memorial Day Week-end. Since several rigs were leaving on Monday, they figured Sunday would be a better day.

And the food was fabulous. The rain let up a little bit so we could at least sit outside to eat. 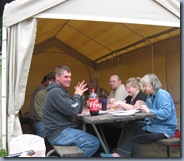 There were three young men camping in a tent that were in the Army and had come up to do some fishing over the week-end. It felt really good to have them be a part of our potluck so we could honor them.

Then on Monday we invaded Jeri and Terry’s son’s house. Their son , Lee, and DIL, Sabrina, made us feel more than welcome. Their grandson Justin barbequed the brisket for the first time.

He did such a good job I want to go back again. A wonderful week-end in spite of all the rain.