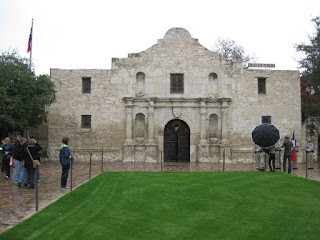 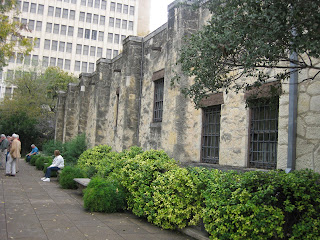 The Battle of the Alamo was a pivotal point in the Texas Revolution.
Originally named Mision San Antonio de Valero, built in 1724, the Alamo served as a home to missionaries and their Indian converts for nearly seventy years. In 1793 Spanish officials seized San Antonio's five missions and distributed their lands to the remaining Indian residents.
In the early 1800s, the Spanish military stationed a cavalry unit at the former mission. The soldiers referred to the old mission as the Alamo (Spanish word for "cottonwood") in honor of their hometown Alamo de Parras, Coahuila. 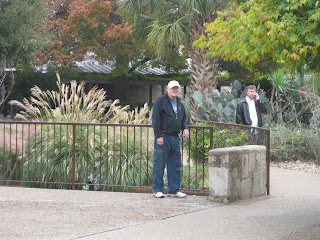 San Antonio and the Alamo played a critical role in the Texas Revolution. IN December 1835, Ben Milam led Texian and Tejano volunteers against Mexican troops quarered in the city. After five days of house-to-house fighting, they forced General Martin Perfecto de Cos and his soldiers to surrender. The victorious voluteers then occupied the Alamo. 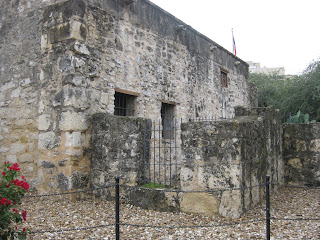 On February 23, 1836, the arrival of General Antonio Lopez de Santa Anna's army outside San Antnio nearly caught them by surprise. Undaunted, the Texians and Tejanos prepared to defend the Alamo together. The defenders held out for 13 days against Santa Anna's army.
As the defenders saw it, the Alamo was the key to the defense of Texas, and they were ready to give their lives rather than surrender their position to General Santa Anna. Among the Alamo's garrison were Jim Bowie, renowned knife fighter, and David Crockeet, famed frontiersman and former congressman from Tennessee. 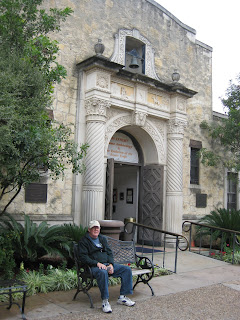 The final assault came before daybreak on the morning of March 6, 1836, as columns of Mexican soldiers emerged from the predawn darkness and headed for the Aamo's walls. The desperate struggle continued until the defenders were overwhelmed. By 6:30 a.m. the last shot was fired. The Alamo had fallen. 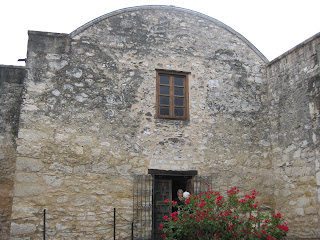 All but two of the Texian defenders were killed. Santa Anna's perceived cruelty during the battle inspired many Texians to join the Texian Army. Buoyed by a desire for revenge, the Texians defeated the Mexican Army at the Battle of San Jacinto, several weeks later, ending the revolution. 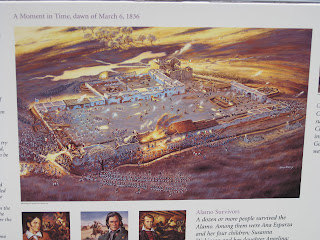 People worldwide continue to remember the Alamo as a heroic struggle against overwhelming odds - a place where men made the ultmate sacrifice for freedom.
I definitely had some wrong ideas about the Alamo. I did not realize it was a mission and encompassed a very large area. The chapel is what I thought was the Alamo and that is where all the men defending the Alamo were located. Actually, most of the men were killed elsewhere and the women and children were in the sanctuay of the chapel.
We went across the street to The History Shop to see the Alamo Diorama. This is owned by Phil Collins the musician who is also really into preserving the history of our country. The Diorama really gave us a great overview of the battle and how it all went down.
Posted by Jim and Sandie at 9:51 AM