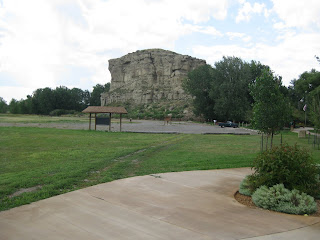 An Indian legend says the rock that became known as Pompeys Pillar fell from the bluff on the opposite side of the river and rolled to its present location.

Archaeological evidence suggests that the immediate area surrounding the pillar was used as a camping spot by Native Americans for at least 5,000 years. The sandstone outcropping was an obvious landmark, a place where the entire village could ford the Yellowstone River.

The first Euro-American explorer o describe Pompeys Pillar was Francois-Antoine Larocque, a French fur trader with the North West Company. Larocque and a party of Crow Indians visited Crow country during the later summer of 1805. On September 15, on the return leg of his journey down the Yellowstone River, Larocque noted in his journal that he had come to "a Whitish perpendicular Rock on which is painted with Red earth a battle between three persons on horseback and 3 on foot."
On July 25, 1806, Captain William Clark and eight members of the Lewis and Clark Expedition (also known as the Corps of Discovery) stopped at the landmark. Clark climbed to the top and recorded in his journal his view of a landscape of grassy plains, snow-capped mountains, and cliffs abutting the wandering river. 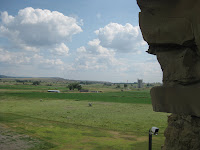 Before continuing downriver, Clark carved his name and the date on the northeast face of the pillar. 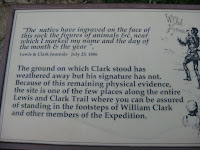 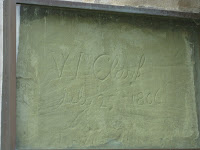 He would later refer to the outcropping as Pompy's Tower, named for little Jean Baptiste Charbonneau, son of expedition members Toussaint Charbonneau and his Shoshone wife, Sacagawea. Clark had grown very fond of the infant and sometimes referred to him as "My boy Pomp." Pomp means "little chief" in the Shoshoni language. 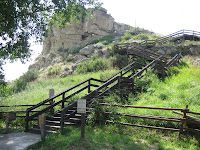 Dugout canoes were used by Clark and his party as they continued down the river because the Indians had stolen all of their horses. 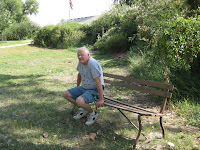 Several U. S. military expeditions passed within the shadow of the pillar as the Indian conflicts blossomed into full-scale warfare. One of the morenotable incidents occurred in August of 1873, when the 7th Calvary, commanded by Colonel David S. Stanley, accompanied surveyors for the Northern Pacific Railroad to the middle Yellowstone valley. Lieutenant Colonel George Armstrong Custer was also present.

The military detachment camped a short disance northwest of Pompeys Pillar on the north bank of the river. While some men washed their clothes, a number of others bathed in the river. Suddenly, a small party of Sioux warriors appeared on the opposite bank and fired a volley into the naked swimmers, causing a frantic scramble for cover. The soldiers weren't injurd and the warriors soon withdrew. Although the encounter was brief, it may have been a little bit humorou to all but those in the direct line of fire.