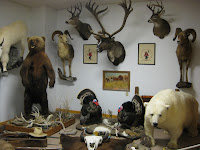 This diorama covers 7,000 squae feet and is located inside the Tecumseh's Trading Post in Cody, Wy. Absolutely amazing. The amount of work that has gone into this is astounding. It traces the history of Wyoming and Montana from the 1600's to the late 1890's. 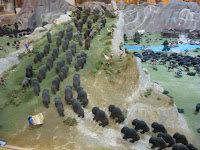 Scenes include tiny buffalo driven over a cliff and suspended in mid-fall, mountain men competing at the Green River Rendezvous and Sioux warriors besieging a stockaded trading post. 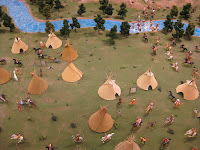 Other scenes include Chief Joseph retreating from the Army through the mountains, Indians communicating with smoke signals and the Battle of the Little Bighorn (Custer's Last Stand). 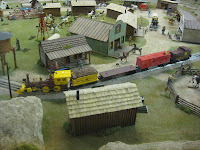 Still other scenes depict building railroads in the West and the plains, wagons on the Oregon Trail and Buffalo Bill's Wild West show. 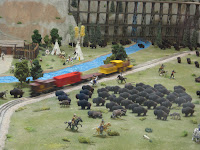 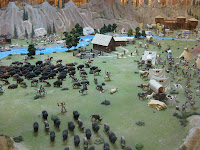 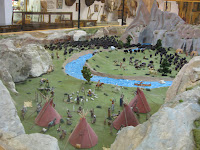