At the height of WWII, in 1942, about 120,000 Japanese-American citizens were removed from their homes and placed in 10 internment camps around the country. One of them was the 10,767 resident Heart Mountain camp northeast of Cody, WY. 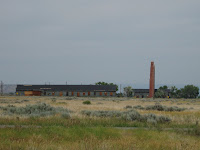 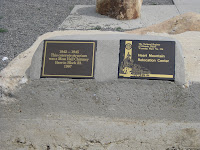 Two thirds of the internees were American citizens. The camp was surrounded by a barbed-wire fence, and armed military police manned nine guard towers with search lights. The Wyoming Legislature enacted special laws restricting the activities and movements of the internees. 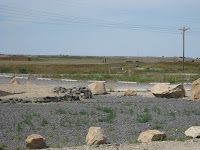 The camp was occupied August 12, 1942 to November 15, 1945. When they were released, many internees found they had nothing to return to as their homes and businesses had been foreclosd on because of their inability to continue payments while detained in the camp. 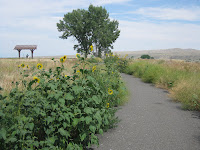 In 1986 a memorial was established at the camp to honor is residents who died while fighting for the Allies durin the war. The 442nd Japanese-American Regimental Combat Team was one of the most highly decorated of the war. 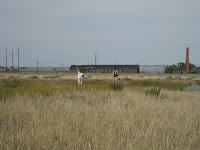 Several empty buildings and the hospital chimney spire are all that remain of this terrible reminder of man's inhumanity to man. For more information, please visit the web site at http://www.heartmountain.net/. 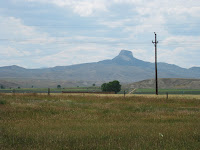 This is a picture of Heart Mountain.