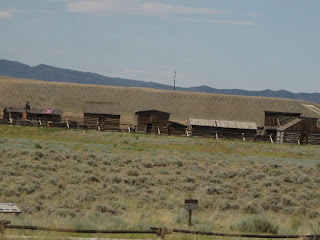 Old Trail Town is located on the site that Buffalo Bill Cody surveyed for the first town site of Cody City in 1895. Most of the structures were moved to Cody from less than 150 miles away and each is historically significant.

One cabin (the Mud Spring Cabin) was used by Kid Curry and the Sundance Kid as a hideout before they attempted to hold up a bank in Red Lodge, MT. There is also a cabin from Hole in the Wall country which as built in 1883 and was a rendezvous point for Butch Cassidy, the Sundance Kid and oter outlaws in the region. Curly's cabin came from Crow Agency, MT. Curley was a scout for George Armstrong Custer and accompanied him before the Battle of the Little Bighorn. However, Curly saw trouble coming and wisely left before the fight on June 25, 1876.

Behind Old Trail Town is the graveyard where Jeremiah "Liver Eatin" Johnston is buried. Also buried there is Buffalo Bill's last grandchild, Bill Garlow Cody, who died in 1992 and Floyd Stillings an early day rodeo champion.
Posted by Jim and Sandie at 12:18 PM