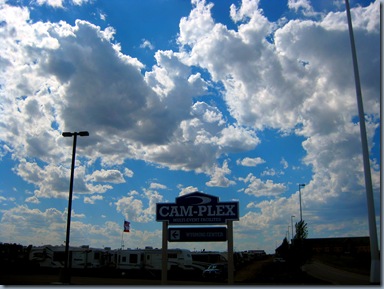 I thought today was going to be pretty much a repeat of yesterday. But think again.

We attended a couple of seminars in the morning and then came back to the rig to walk the girls and have some lunch before we had to go back and drive golf carts again.'

That all changed when Jim got a phone call. This is the bad. I’m sitting next to him and I hear him giving out his debit card information and I try to get him to tell me what he’s doing. But he shushes me. However, as soon as he hangs up the phone he gets a stricken look on his face and says, “I’ve just been scammed.” 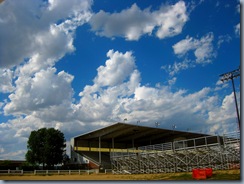 He used his debit card this morning to get fuel and the phone call says it is from the Wells Fargo Fraud Department and that his card has been frozen. In order to verify the information he needs to give them the card number, the expiration date and his name. Which he did. Jim is not stupid and is very aware of these scams so this just proves how easy it is to fall for one of them.

He immediately calls Wells Fargo and they tell him that they had not contacted him. Off we go to the nearest Wells Fargo office. April is the banker who helps us and she is wonderful. This is the start of the good.

April cancels that debit card immediately and reports it as stolen so that it cannot be used. Whoever this is has not tried to use the card yet so we are now safe from them. April said to keep a close eye on the account – like twice a day for the next six months just to be on the safe side. I will be following her advise very closely.

We are much happier now. But it gets better. We had gotten a notice from Wells Fargo that they were no longer going to offer free checking and that we would be charged a $7 a month fee on two of our checking accounts. I figured we would have to bite the bullet and pay it. April was able to set us up on a different type of account that puts $25 a month out of each account into a savings account and that waives the $7 a month fee. Isn’t that just sweet. 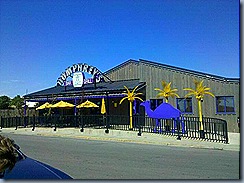 After this excitement we decide to go out to lunch before we drive the shuttles. Asked April where we should go and she sent us to Humphrey’s. Fun place.

From their web page:

Once upon a college exam, a few guys got together drinking beer, eating food and watching reruns on the boob-tube and began thinking of what the heck they were going to do with the rest of their lives. So, realizing what they do best - which is drinking beer, eating food, and watching T.V. - they decided to open a place called Humphrey's. Now the only thing that stood in their way was designing the decor - it ended up being the easiest job, however. After a few garage sales, digging through basements and a couple of junk yards, Humphrey's Bar and Grill was born. 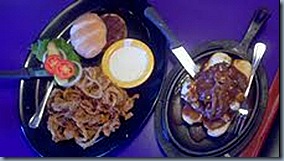 I had a burger and onion rings and Jim had the smothered roast beef (a hot beef sandwich on a hoagie bun). My burger was great. Jim’s was too salty but good. I would definitely like to go back here again before we leave town.

Back to walk the girls and then go drive golf carts. It was a pretty slow day so I took lots of pictures of clouds. 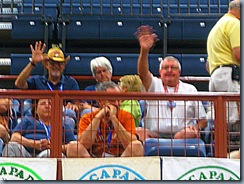 John, Karen, Polly (with her back turned) and Vern.

Wednesday night was Ham-O-Rama. Escapee’s Talent Show. Jim’s leg and back were really bothering him so he went home but I stayed for the rest of the show. Some good, some okay. 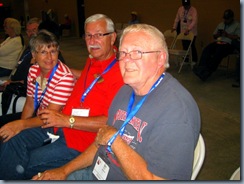