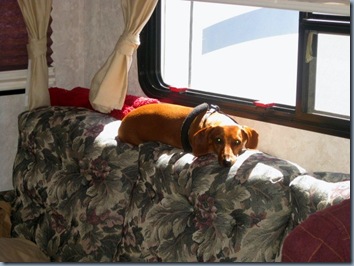 Didn’t get moving too early today. But when I finally decided to get up, Jim fixed me one of his wonderful omelet and bacon bagels. What a great way to start the day.

Got our laundry done. Always a good thing to have that done for another couple of weeks.

Our group is slowly dispersing to all parts of the West and Mid-West. Jim and Jan left Saturday morning. Polly and Vern leave Sunday morning. I think the rest of us are here until Tuesday.

We wanted to have a goodbye dinner and everybody thought Humphrey’s sounded like a great place to go. So back to Hump’s for us. Had a fun time, a great waiter (Paul) and everybody liked their dinners. I didn’t get any pictures this time, so just use your imagination and picture 10 of us and the trouble we can cause. 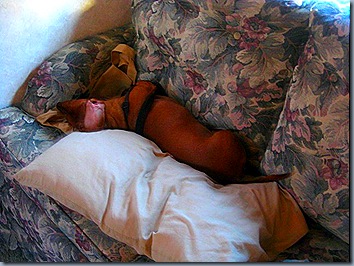 I would like to address the comment made by Sam & Donna on my last post. Sam told about going to a Samboree and how rudely they were treated. Jim and I had the same experience at a Samboree (a Good Sam Chapter Rally) and vowed never, ever to go again. I have found Escapees to be a much friendlier group of people. But it’s also hard to meet people at an Escapade if you’re a newbie.

You need to be willing to step out of your comfort zone and start a conversation with someone who looks interesting. Not an easy thing for most of us to do. You will see groups of people sitting out and think that they don’t want anybody else to join them. But that’s not true. At least not with the groups I’ve run into. I can be very outgoing – even though it doesn’t come naturally for me. So I just introduce myself and usually have a great response.

I tried that at the Samboree and it went over like a lead balloon so it was a long time before I got brave enough to try again. One of the best things ever did come out of the Samboree – that’s where we met our really good friends, Jan and Bill. They are parked next to us here at Escapade and we make sure we see them on the road several times throughout the year.

At our first Escapade we came away with one very special friend, Paul. At our second Escapade we arranged a get together with all of our Class of 2009 attendees. The Class of 2009 is made up of those of us who are Escapees who hit the road in 2009. From there, the people we’ve met and become friends with has grown with each year we’re on the road.

So when you attend a Rally, try to put yourself out there a little bit. You just might be surprised at the results. Except maybe at a Samboree. I hope I haven’t offended anyone who really enjoys Samboree’s. Maybe those folks could make a better effort at welcoming newbies to their group.