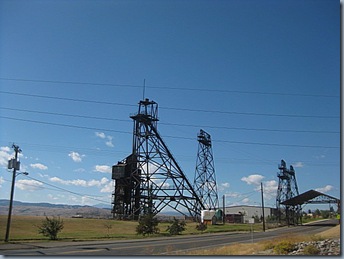 I get to be a tourist again and yes it does feel good. I know a lot of folks who don’t do the tourist thing but I’m rather addicted to it. Which means, of course, that Jim gets to go along to do the driving. I enjoy the beauty of our land but I also like to learn about the history of places we visit and all the quirky things that people have done.

So here we go to explore Butte, MT. Don’t have time for everything but some of the highlights. 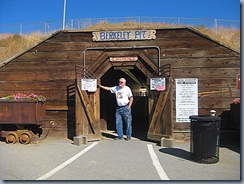 The Berkeley Pit is a former open pit copper mine. It is one mile long by half a mile wide with an approximate depth of 1,780 feet. It is filled to a depth of about 900 feet with water that is heavily acidic (about the acidity of cola or lemon juice). As a result, the pit is laden with heavy metals and dangerous chemicals that leach from the rock, including arsenic, cadmium, zinc, and sulfuric acid. 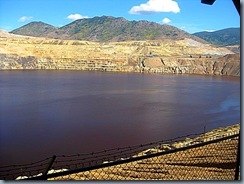 The mine was opened in 1955 and operated until its closure in 1982. The pit and its water present a serious environmental problem.  The Berkeley Pit has since become one of the largest Superfund sites. 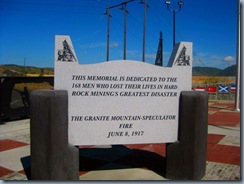 The beginning of World War I brought intense activity in Butte's underground mines to satisfy the warring world's insatiable appetite for copper. Butte became known as "The Richest Hill on Earth". In 1883, 2,000 miners worked in the mines. By 1916, there were 14,500 miners working the mines.
On the night of June 8th, 1917, a group of men descended to the 2400 level of the Granite Mountain mine to inspect an electrical cable that had fallen loose while being strung by a crew on an earlier shift. When the cable fell, the workers from the earlier shift decided to leave it until the next day. The protective sheathing frayed as it fell against rocks and timbers. When Ernest Sullau, the assistant foreman, inspected the cable, he accidentally touched his hand-held carbide lamp to uncovered paraffin paper wrapping, and the cable caught fire.
The tragedy was compounded because the Granite Mountain was a well ventilated mine, allowing the flames and smoke to spread quickly. The fire and deadly smoke killed 168 men. 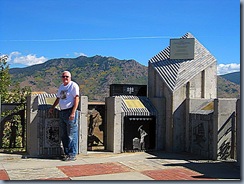 The fire was the deadliest disaster in metal mining history and shocked the world. In 1917 Butte was an industrial complex that rivaled the steel mills of Pittsburg. Additional people had to be hired to handle all the telegrams that came in from around the world wanting more information about the disaster.

And no trip to Butte is complete without food. There are two foods that Butte is famous for: The Original Pork Chop John’s sandwich and pasties. 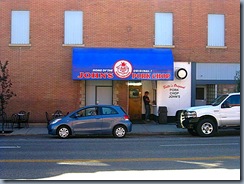 John’s Original Pork Chop Sandwich was founded in Butte, Montana in 1924. The original Pork Chop John, John Burklund, sold his pork chop sandwiches from the back of a wagon located on the corner of Mercury and Main Streets. 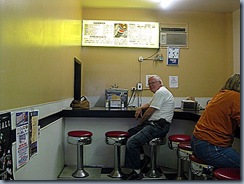 As demand for the  sandwich increased, John opened a restaurant on Mercury Street in 1932. Consisting of a counter, 10 stools and a walk-up window, that same store remains and that is where we had our sandwiches. 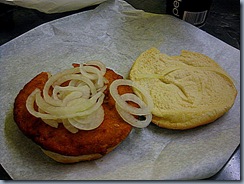