Tuesday, September 6 – time to leave Gillette. The Labor Day week-end is over and hopefully most of the people have gone home so there won’t be so much traffic. We said our good-byes and see ya soons and headed over to get weighed.

Needless-to-say, we need to get rid of some weight. So once we get back to Billings, we will go through everything and see what can be left behind. I may just have to give up my books and go with a Nook or Kindle. Any thoughts on those? 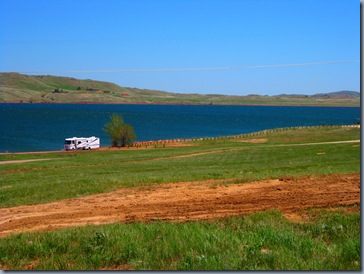 Lake DeSmet last June on our way to Billings. I didn’t get a picture of the fiver this time.

Judy and Gary are traveling with us back to Billings and we convinced them that 234 miles was just too far to travel in one day. So back to one of our favorite places, Lake De Smet. This time we got OUR campsite – right on the water. Lots of room for Judy and Gary to join us there. There was hardly anybody around – a couple of boats and one other RV off in the distance. So quiet and peaceful. Just love it there. 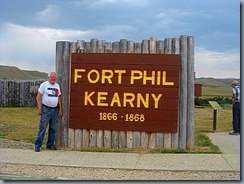 Every time we drive through this area, I think about stopping at Fort Phil Kearny Historic Site and we never have. Today was the day. 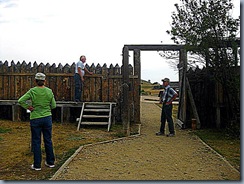 Fort Phil Kearny, located along the east side of the Bighorn Mountains, was named for a popular Union General, and was established by Colonel Henry B. Carrington of the 18th U.S. Infantry in July, 1866. It was one of three posts established to protect emigrants traveling the Bozeman Trail north to the gold fields of Montana, and also to prevent intertribal warfare between Native American tribes. It later proved useful to draw the attention of Indian forces away from the trans-continental railroad construction corridor to the south. 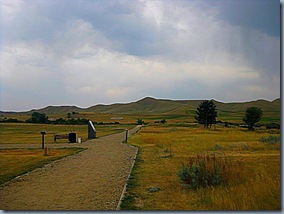 The Bozeman Trail began as a gold-rush trail--a shortcut from the main trail on the North Platte River to the gold fields of Montana.The several routes of the Trail overlaid earlier Indian, trader and exploration routes in Wyoming and Montana. 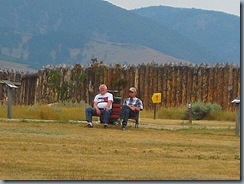 Notice the Bighorn Mountains in the back. 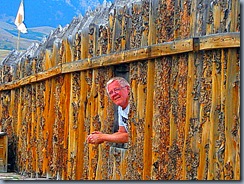 While only about 3,500 emigrants traversed the trail in 1864-66, its most significant consequence was that it cut through the Powder River Basin, the last and best hunting grounds of the Northern Plains Indians, and led to military occupation of the region and ultimately resulted in the Indian wars on the Northern Plains. After emigrant use ceased, the Trail served as a military road to the forts until it was abandoned in 1868 following the Fort Laramie Treaty.

The story of Fort Phil Kearny was a forerunner to the events at the Little Big Horn a decade later. It was the story of the Indians, emigrants, the military, civilian contractors, Indian and white women and children as well as warriors and soldiers...of the famous ride of John "Portuguese" Phillips to Fort Laramie after the Fetterman Fight, and the Wagon Box Fight of 1867.

During its brief two-year existence, Fort Phil Kearny was the focal point of a violent war between the U.S. Army and the Sioux, Cheyenne, and Arapaho Indians. When the Union Pacific Railroad reached a point where the dangerous route was no longer needed, the Bozeman Trail and the three forts were abandoned in the Fort Laramie Treaty of 1868. Shortly after, Fort Phil Kearny was burned, probably by Cheyenne Indians.

The Fort was built of pine logs, cut and hauled from the foothills of the Big Horns, about seven miles west.  The first 6 months after the post was established 154 persons were killed by the Indians, and 700 head of cattle, mules and horses captured. 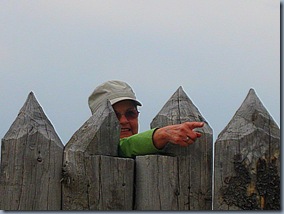 The Fort was 600 feet by 800 feet, enclosed with a stockade of heavy logs placed three feet in the ground and standing eight feet high.  The square spikes to nail the logs were 5" long. Firing notches cut along the stockade banquet at every fifth log, with blockhouses or gun-bastions built on two opposite corners. There were gates on all sides. Five guard stands provided 24 hour surveillance of the grounds both inside and outside the post. 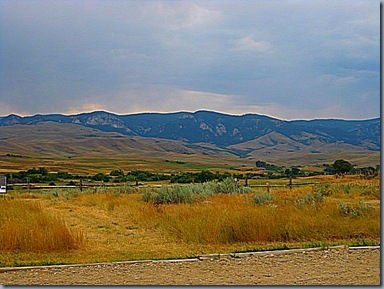 The First garrison flag to fly between the North Platte and Yellowstone Rivers. The sight of a huge 20 by 36 foot American flag flying atop a 124  foot  flagpole came as a great relief to the traveler of the Bozeman Trail.  It meant safe-haven, temporarily free from the rigors of the trail and from Indian attack.  It was built of lodgepole pine, in two pieces, similar to a ship's mast. It was raised, on October 31, 1866.

There is so much more to learn about here. There’s the Fetterman Fight and the Wagonbox Battle. But those will have to be left for another visit. 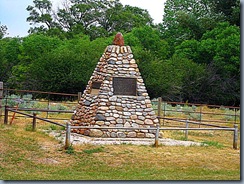 This is a picture of the monument to the man credited for carrying the news of the Fetterman Disaster through hostile Indian country 236 miles from Fort Phil Kearny to Fort Laramie, John "Portuguese" Phillips. If you want to read his amazing story, please go to this website: http://www.lrgaf.org/journeys/ride-help.htm.