There are lots of seminars scheduled, but since this is the third Escapade that Jim and I have attended, we are pretty selective on the seminars we want to listen to. We come mainly for the social aspect of the Rally. 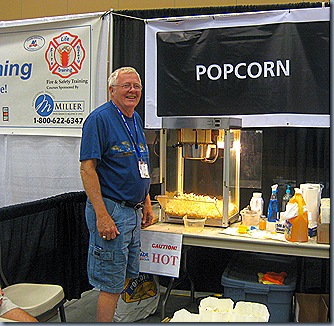 On Monday morning, we worked the Popcorn Booth for three hours. We like to volunteer when we come to Escapade. It’s a nice change of pace and you get to visit with lots of the people. We had four of us manning the booth and we got our system down quickly. The popcorn is donated by Miller Insurance and is free. Our morning started kind of slow – guess not too many people want popcorn at 9:00 a.m. But by 10:00 we could hardly pop it fast enough. We were definitely ready for a nap when we finished up there.

He got back to the rig and a bunch of the guys stood outside talking about everything they had learned until it was time for dinner. After dinner, we headed back over to the Wyoming Center for the door prize drawings. Not sure why because we definitely don’t ever win anything, but never give up hope.

We have been riding the golf cart shuttles which is easier even though there is a lot of parking available. Jan and Bill were driving last night so Jim called Jan and we had our own “limo” pick up. Looked like a storm brewing over in the northeast and I hoped it would hold off until we got home. No such luck. It was a major happening about half way through the door prizes. Lightning was shooting off everywhere. Cloud to cloud, cloud to earth. And really close and loud.

I wanted to get back to the rig to check on Scooter and Skitz but they weren’t letting the golf carts run during the storm which makes sense. Bill had driven his pick up over so he offered to give us a ride back in the truck because he knew I was a nervous wreck worrying about the girls. We finally had a lull in the storm and he brought us home just before the next storm hit. It was a pretty wild night around here. Scooter’s little heart was certainly thumping rapidly and she was sure glad to see us. Skittz, of course, really could care less about the storm but was glad to see us cause that meant she got a treat.

We didn’t stay for the entertainment and several people told us we really didn’t miss anything. Tomorrow, a couple more seminars and then we volunteered to drive the golf carts.