We left Las Vegas on Tuesday after spending an extra day because of the wind. We drove to Quartzsite to spend the night before heading into Apache Junction.

Quartzsite is still pretty empty but a few of the folks who spend the winter there are starting to arrive. I’m really not sure why anyone would want to spend the winter in Quartzsite, but each to their own. Some of the restaurants were not open and the vendors were few and far between.

One of my classmates from grade school through high school and her hubby just became full timers and this is their first winter in the southwest. They chose Quartzsite because of friends who are also there. This gave us a chance to have dinner with them and catch up on a lot of old memories. 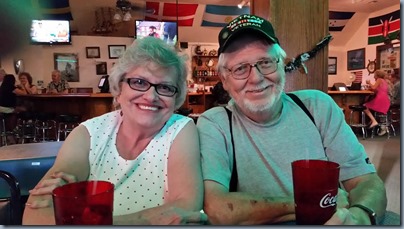 We went to the Yacht Club for dinner and it was really good. We will be seeing Wanda and Dale again next September in Billings for our 50th Class Reunion.

We left Quartzsite about 8:15 and other than the usual traffic on I-10, had an uneventful trip back to Apache Junction. We have spent the last two days moving stuff from the Bungalow into the fifth wheel.

But we got the Bungalow settled in her storage space and took a break from “work” to have dinner with Paula at Los Gringos Locos.

It’s good to be back.