I had thought by now that we would be settled enough that I could catch up on blog reading because I am so far behind. But somehow we are busier than ever and my internet connection is so slow. I really think I need a new Wi-Fi. 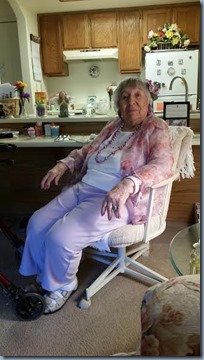 We went to visit Aunt Happy who is still amazing. She turned 103 last August. She had a great summer with no health issues except for a little arthritis in her hands. We talked about the election (she’s as fed up as we are with both candidates) and the fact that she had already voted. She is also very worried about the impact of the election on the stock market and what it will do to her money situation. Like she says, she never expected to live this long. She also had a pair of earrings that had broken. These are very inexpensive earrings which happen to be one of her favorite. Other people told her she should just throw them away, but she told them that Jim could fix them. If Jim couldn’t fix them and told her to throw them away, then she would. Well, Jim could fix them which made her so very happy. It was a wonderful visit.

Skittlez is glad to be home again.

We’ve been spending a lot of time being welcomed back to the park. Jim and I were talking about how much more of a community we live in here in AJ than we did in Billings when we were working. For us, this is a comfortable feeling. We can be as involved as we want to be and still know that if we need any help, there are always folks around.

Another first for us. We now have DirecTV. We have never had satellite TV before and we almost didn’t get it this time. Jim loves NASCAR and a lot of the races are not available on antenna TV. I finally decided we’d bite the bullet and get him NASCAR and a few channels for me.

But it sure didn’t happen without lots of problems. The salesman who took Jim’s order didn’t get it right at all. We wanted two receivers and two dishes so we can have satellite TV in the Bungalow also. The installer showed up on Thursday with only one set up. We thought he could at least do that one and then come back to do the Bungalow, but if he did that, they would charge us an installation fee for the Bungalow. The installer called back in to reschedule for us and told whoever what we wanted. Scheduled for Friday morning.

Friday morning two different guys show up. Took one look and told Jim that they cant install DirecTV in an RV. WHAT!!! Jim took them across the street and showed them two different fifth wheels with DirecTV. He didn’t want them touching our rig and sent them on their way. (These installers are independent contractors and don’t work for DirecTV or AT&T which now owns DirecTV.) Another call to DirecTV. After being transferred four times to different people (including being told to call Wyngard for who knows what reason), he hung up and called back. This time he asked to speak to a manager. 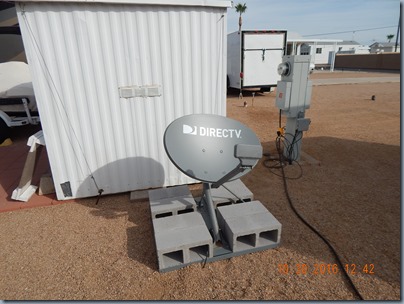 After a long discussion, they said they finally agreed that they would send out a senior technician Friday afternoon. This guy actually works for AT&T. And he knew what he was doing. Yahoo! After several hours we now have satellite TV. The challenge now is learning how to use the remote.

Mom, get rid of that flash please. 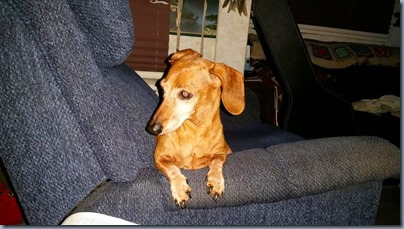 I want to express my sadness that our dear friend Joe passed away. Our love goes out to his wife Betty at this very sad time. We also have many loved ones fighting Cancer. Retired Rod is still undergoing chemo. Denise (Sassy) is recovering from her brain surgery. Paula (Shadowmoss) is starting her battle with breast Cancer. Our beloved niece, Patti, is going through Chemo for lung Cancer. We ask for prayers for all of them and for everyone else who is fighting the brave fight.