Todd and Michaela – you need to check this out. This BnB is located in Cottonwood, ID. Your room is in the belly with a loft in his nose. Their website - http://www.dogbarkpark.com/ 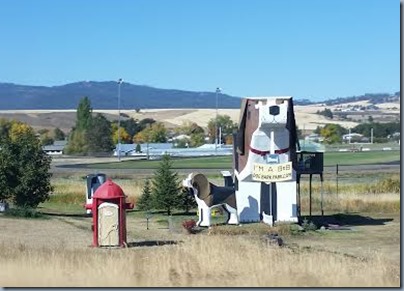 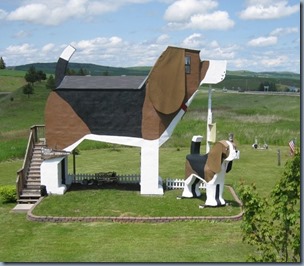 We followed Highway 95 south through Hells Canyon, North America’s deepest river gorge, We also had to climb White Bird Summit at 4,383 feet which meant we had to come down an eight mile 7% grade. It was a beautiful drive but Jim was glad that we broke it into two days with an overnight in Council, ID.

My nephew and his family live in Emmett, ID and we stayed at an RV park in Sand Hollow called Country Corners RV Park. The owners are the nicest, most accommodating folks we’ve ever met. Highly recommend this park if you are in the area.

Boise is about 35 miles from the park and, of course, everything I wanted to see was in Boise.

Our first stop was at Boise State University. I had read about a Sports Humanitarian Exhibit that I really thought would be interesting. It no longer exists but we were still able to have our picture taken with the “Blue”. It was the first non-green playing surface in football history. 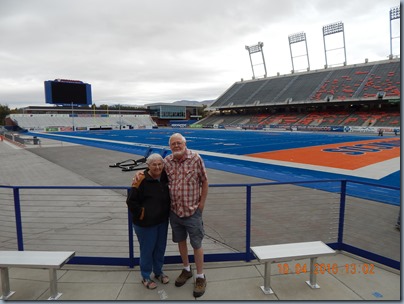 Next on my list was the Basque Block in downtown Boise. The volunteer at the Blue is a Basque and he recommended that we eat at Bar Gernika pub and eatery. After looking at the menu I was glad we weren’t there on a Saturday. My Grandmother would have loved it.

I had a chicken kabob and Jim had a chorizo sausage. 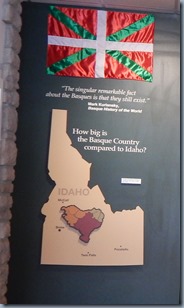 We stopped into the Basque Museum but they do not allow any photos taken. In this picture you can see how small an area the Basque homeland is. They don’t have their own country but inhabit the area surrounding the Bay of Biscay in southwestern France and northern Spain.

The Basques are a genetic and cultural anomaly in Europe and speak a language unrelated to any other known tongue on earth. The Boise Basque population is the second largest in the United States with Bakersfield, CA being the largest.

After leaving the Basque Block, we went to Freak Alley. At least we tried to but traffic was horrendous and there was no place to park. So here’s a picture from the truck. 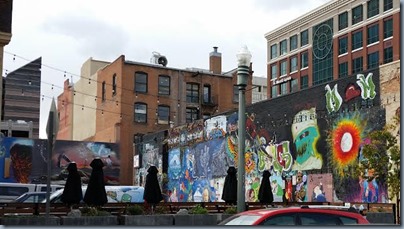 Time to head home and feed Skitz. She’s going to think we’ve totally forgotten about her. After taking care of Skitz, we went to my nephew’s house for dinner and didn’t get home until 10:30. That’s really late for us old folks.