Getting ready to head north.

We tried to get Jim’s doctor’s appointment moved up but no luck so we’re still stuck here in the heat. His appointment with his cardiologist is next Wednesday and if all goes well (we expect it to) we will be out of town on Thursday.

Jim gets up early and does some waxing on the rig when it’s still relatively cool. I try not to let him over do because I know it’s hard on him with his breathing but you know what these men are like.

We did get the patio table put away. The chairs are still out even though it’s too hot to sit outside. We do use them when the girls want to go out and lay on the hot rocks for a couple of minutes. 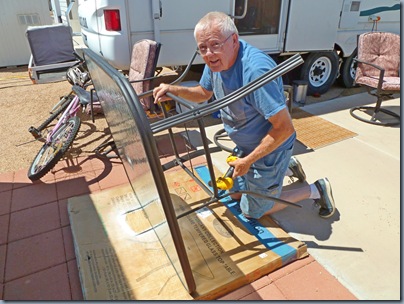 As of yesterday, I think the park is down to those who stay all year round, Ginny and Mickey, and us. Ginny and Mickey will be leaving Saturday. They plan on spending the summer up at Show Low where it is much cooler than it is here.

Last Saturday, we went to the Arizona Speedway with Ginny and Mickey. It’s a dirt track and we watched superstocks, sprints, mini-sprints, and bombers. We had a great time. 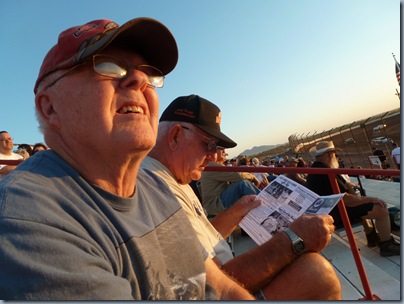 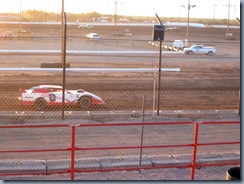 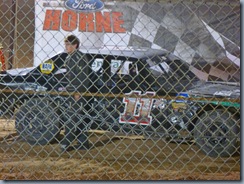 This kid is only 16 and he won the bomber race by leaving everybody else in the dust. Wonder if we have an up and coming NASCAR driver.

Ran a bunch of errands – post office, Walgreens, bank, got the girl’s nails clipped, Petsmart to make sure we have enough dog food. (That’s always a priority, you know.) That way we don’t have to find a store along the way that carries the special venison food they eat. Also went to Good Will to drop off a couple of bags of stuff that we cleaned out.