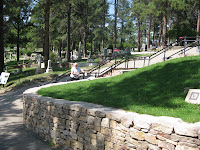 Hickok was born in Homer, IL (what is now Troy Grove) on May 27, 1837. While he was growing up, his father's farm was one of the stops on the Underground Railroad, and he learned his shooting skills protecting the farm with his father from slave catchers.In 1855, at the age of 18, Hickok moved to Kansas Territory following a fight with Charles Hudson, which resulted in both falling into a canal. Mistakenly thinking he had killed Hudson, Hickok fled and joined General Jim Lane's vigilante Free State Army ("The Red Legs") where he met 12-year-old William Cody, later to be known as "Buffalo Bill," who at that time was a scout for Johnston's Army.
On August 2, 1876, while playing poker at Saloon No. 10 in Deadwood. Hickok could not find an empty seat in the corner of the room, where he always sat in order to protect himself against a possible attack from behind, and instead sat with his back to one door while facing another. He was shot in the back of the head with a .45- by Jack McCall. Legend has it that Hickok was playing poker when he was shot, holding a pair of aces and a pair of eights. The fifth card is debated, or, as some say, had not yet been dealt. "Aces and eights" thus is known as the "Dead Man's Hand". The motive for the killing is still debated. McCall may have been paid for the deed, or it may have been the result of a recent dispute between the two. Most likely McCall became enraged over what he perceived as a condescending offer from Hickok to let him have enough money for breakfast after he had lost all his money playing poker the previous day. McCall claimed, at the resulting two-hour trial by a miners jury that he was avenging Hickok's earlier slaying of his brother, which was later found to be untrue. 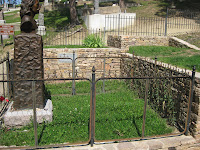 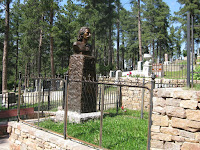 McCall was acquitted of the murder. McCall was subsequently rearrested after bragging about his deed, and a new trial was held. The authorities did not consider this to be double jeopardy because at the time Deadwood was not recognized by the U.S. as a legitimately incorporated town. The new trial was held in Yankton, capital of the territory. Hickok's brother, Lorenzo Butler Hickok, traveled from Illinois to attend the retrial, and spoke to McCall after the trial, noting he showed no remorse. This time McCall was found guilty. McCall was hanged on 1 March 1877 and buried in the Roman Catholic cemetery. When the cemetery was moved in 1881, his body was exhumed and found to have the noose still around his neck. 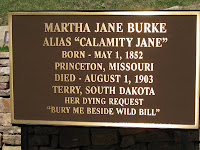 Hickok was originally buried in the Ingelside Cemetery, Deadwood's original graveyard. The graveyard filled quickly and was in an area that could be better used for the constant influx of settlers to live on, so all the bodies there were moved up the hill to the Mount Moriah Cemetery in the 1880s. 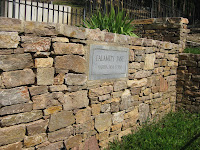 Hickok is currently interred in a ten-foot square plot at the Mount Moriah Cemetery, surrounded by a cast-iron fence with a U.S. flag flying nearby. It has been reported that Calamity Jane was buried next to him because that was her dying wish. However, four of the men on the self-appointed committee who planned Calamity’s funeral (Albert Malter, Frank Ankeney, Jim Carson, and Anson Higby) later stated that since Bill had “absolutely no use” for Jane in this life, they decided to play a posthumorous joke on Hickok by laying her to rest for eternity by his side. 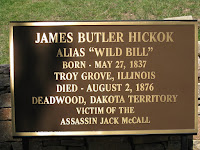