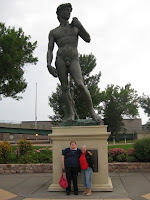 While in Sioux Falls we got to spend some time with a friend, Anne Hullinger, who just happens to be the greatest tour guide I've ever had. We had dinner and the she took us on a tour of her city. And a beautiful city it is.

This is a replica of Michaelangelo's statute of David. It was donated to the city in 1971 by Thomas Fawick. It originally faced the street but during a clean up of the park which took several years, he was left lying on a flatbed in storage. After many meetings it was determined that he would be replaced in the park but would be facing the park, not the street.