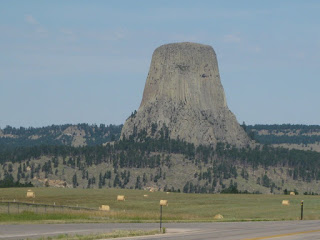 We are finally on the road again. We didn't get out of Billings until almost 7:00 p.m after all the work with the water leak and getting loaded and ready after sitting in one spot for three months. (Wayyyyy too long.) We spent the night at the Welcome Center in Sheridan, WY. They allow you to sleep there but you can't put out any slides which would be considered camping. We were so tired it didn't matter because we pulled in and went to bed.
The next morning we visited Devil's Tower. The Kiowa people tell the following story of how Devil's Tower was created: 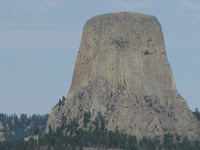 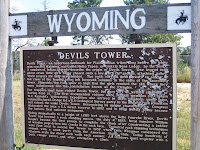 Eight children were there at play, seven sisters and their brother. Suddenly the boy was struck dumb; he trembled and began to run upon his hands and feet. His fingers became claws, and his body was covered with fur. Directly there was a bear where the boy had been. The sisters were terrified; they ran, and the bear after them. They came to the stump of a great tree, and the tree spoke to them. It bade them climb upon it, and as they did so it began to rise into the air. The bear came to kill them, but they were just beyond its reach. It reared against the tree and scored the bark all around with its claws. The seven sisters were borne into the sky and they became the stars of the Big Dipper. 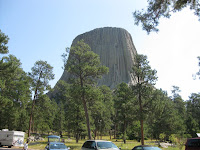 I find that story much more exciting than the following: About 50 million years ago molten magma was orced into sedimentary rocks above it and colled underground. As it cooled it contracted and fractured into columns. Over millions of years, erosion of th rock exposed Devil's Tower which rises 867 feet from it's base and stands 5,112 feet above sea level. The diameter of its base is 1,000 feet.
You can chose which story you want to believe.
In 1906 President Theodore Roosevelt proclaimed Devil's Tower the first national monument.
Posted by Jim and Sandie at 8:19 AM