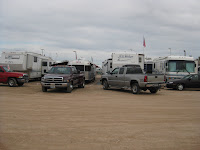 A Samboree is an RV rally of Good Sam Club members. The one we attended in Casa Grande was sponsored by the Arizona Good Sam Club. It was an interesting experience and we had some fun and met some nice people, but I won't be attending another one. Most of the people who came are members of a Good Sam Chapter and that's who they spent all their time with. Those few of us who were new and don't belong to an actual chapter were kind of left "out in the cold." 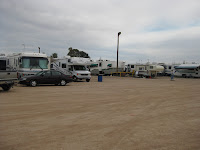 On Thursday night though we attended a pot luck dinner sponsored by one of the Chapters and we sat down by an elderly couple and got to visiting and found out that they were from Billings. Talk about a small world. They moved to Arizona about 15 years ago and gave up their RV last year. They go to Billings every summer for a couple of months to visit kids and grandkids. 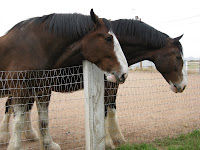 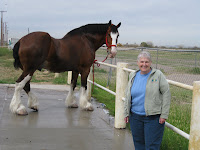 The rally was held at the Pinal County Fairgrounds and they are getting ready to hold their County Fair. So these beautiful animals were there for us to enjoy. They are as magnificent as they look to be in their commercials. I wanted to see one of them "fetch" but the trainers just wouldn't cooperate with me. 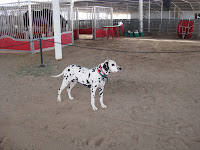 This is Brady. Oh if only my girls were 1/4 as well trained as he is. Isn't he gorgeous? 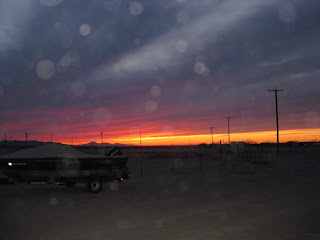 And this sunset was so worth it.
Posted by Jim and Sandie at 7:27 AM