I love these old mining towns and the history that goes along with them. Chloride got its start in the late 1870s by accident. Harry Pye, a mule skinner, was hauling freight through the area for the U. S. Army when he found some promising looking "float". He had the rocks assayed and found they were rich in chloride of silver. Pye didn't tell anybody about his find until his contract with the Army ended in 1879. Then, with two companions, he returned to Chloride Canyon and staked his claim. Shortly, his party was attacked by Indians and Pye was killed.

The word got out that there was a rich silver strike, and by 1880 miners had flocked to the area. By late 1881, Chloride had eight saloons, three mercantile stores, two butcher shops, a hotel, boarding houses, an assay office, livery stables, a candy store, a drug store, a law office, a Chinese laundry and a millinery store. The population grew to about 3,000 duirng its heyday.

Chloride started to decline in the mid 1890's when the U. S. government selected gold as the monetary standard. By 1900, Chloride had become a quiet little village. 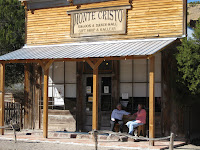 The Monte Cristo Saloon was built in 1880. 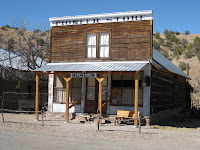 The Pioneer Store, also located on Wall Street, was also built in 1880 and is now a museum. 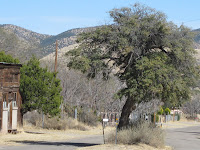 This tree is the old hanging tree. The locals don't seem to want to say how many people were hanged from this old tree. (FYI - 30 people still call Chloride home.)
Posted by Jim and Sandie at 4:23 PM