Time for another history lesson. This was the hottest day of the year so far (90) and I drug poor Jim out into the middle of the desert. But it was well worth it. 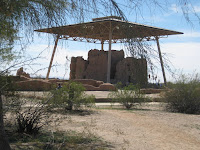 Pictured here is the Casa Grande, or "Big House," one of the largest prehistoric structures ever built in North America, its purpose remains as much a mystery as the people who built it. Archeologists have discovered evidence of wide-scale irrigation farming and trade which lasted over a thousand years and ended about 1450. Today the ancient ones are remembered as the "Hohokam," an O'odham word meaning "Those Who Are Gone." 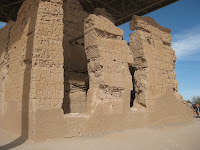 The Hohokam abandoned the Casa Grande area around 1450 AD, leaving no written language behind. Historic accounts of the Casa Grande begin with the journal entries of Padre Eusebio Francisco Kino when he visited the ruins in 1694. In his description of the large ancient structure before him, he wrote the words “casa grande” (or “great house”) which are still used today. More became known about the ruins with the later visits of Lt. Col. Juan Bautista de Anza’s expedition in 1776 and Brig. Gen. Stephen Watts Kearny’s military detachment in 1846. Subsequent articles written about the Casa Grande increased public interest. During the 1860’s through the 1880’s more people began to visit the ruins with the arrival of a railroad line twenty miles to the west and a connecting stagecoach route that ran right by the Casa Grande. The resulting damage from souvenir hunting, graffiti and outright vandalism raised serious concerns about the preservation of the Casa Grande.

Anthropologist and historian Adolph Bandelier visited the Casa Grande ruins in 1883-1884 and reported on its condition and probable significance. The Hemenway Southwestern Archaeological Expedition of 1887-1888, sponsored by Massachusetts philanthropist Mary Hemenway and led by anthropologist Frank H. Cushing, produced further information on the deterioration of the Casa Grande. As a result, several influential Bostonians urged Massachusetts Senator George F. Hoar to present a petition before the U. S. Senate in 1889 requesting that the government take steps to repair and protect the ruins. Repair work began the following year, and in 1892, President Benjamin Harrison set aside one square mile of Arizona Territory surrounding the Casa Grande Ruins as the first prehistoric and cultural reserve established in the United States. 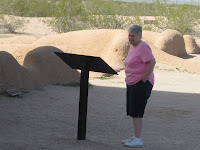 The General Land Office took over management of the ruins and hired a young man named Frank Pinkley in 1901 to be the first on-site custodian. In 1903 a shelter roof of corrugated iron supported by redwood timbers was built over the Casa Grande, and between 1906 and 1908 major excavations and repairs of the ruins were conducted under the direction of Jesse Fewkes of the Bureau of Ethnology. Most of the lower walls visible today were uncovered at that time. President Woodrow Wilson proclaimed Casa Grande Ruins to be a National Monument on August 3, 1918 and management of the Ruins was transferred to the National Park Service. Frank Pinkley stayed on as custodian and eventually became the superintendent of all southwest monuments.
The Hohokam made shell jewelry including bracelets, rings, necklaces and pendants. Some of the jewelry was inlaid with turquoise while others had designs etched into the surface. The shells were acquired from as far away as the Pacific Ocean and the Gulf of California.
Posted by Jim and Sandie at 10:13 AM