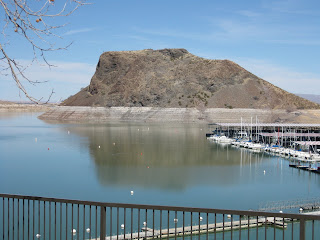 Elephant Butte Lake is New Mexico's largest lake formed by the Elephant Butte Dam on the Rio Grande River. Construction of the dam began in 1911 because there was such a great need for irrigation and flood control of the Rio Grande. The dam was dedicated in 1916. Elephant Butte got its name from this eroded core of an ancient volcano which bears a resemblance to an enormous elephant head and torso rising from the water. As you can see in our picture, the water level is extremely low and being the non-creative person that I am, I have some trouble seeig the elephant. Hopefully, you can see it better than I can. 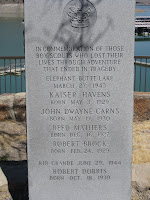 This monument is dedicated to some boy scouts who lost their lives in the lake in March of 1943. The boys had been told not to go into the water but being boys, they found a boat that was partially swamped, bailed t out and decided to row to Rattlesnake Island. In 1943 the lake was high and water was going over the spillway. Only one boy lived and only one body was recovered from the lake. The museum at Truth or Consequences has one of the victim's uniforms on display. 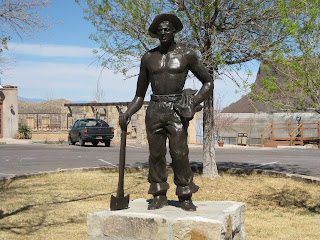 This statue is a tribute to the young men of the Civilian Conservation Corps (CCC). During 1933-1942 these young men developed this area as a recreational area.
Posted by Jim and Sandie at 1:39 PM