I am getting tired of the smoke so I can just imagine how all the firefighters are hating it. My heart and thanks goes out to all of them. We have six firefighters who have been seriously injured trying to save Montana homes and wildlife.

Ginny and Jim did some more fishing but no catching. However, one day when Jim went out by himself he did catch enuf for us to have a couple of walleye dinners. 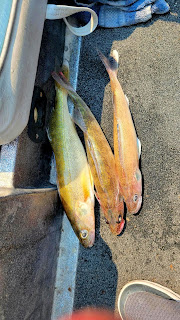 Not every day is sightseeing and fun. We still have the ordinary everyday chores of life - like doing laundry. We loaded up our truck and Ginny and Mick loaded theirs and we headed to Helena. First stop was the Breakfast Club for some really great breakfast burritos. We really like this place 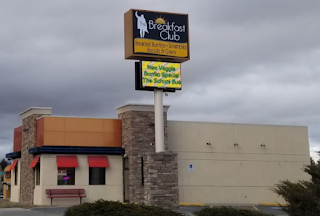 After breakfast we headed over to the laundromat. Ginny and I did laundry while the guys took the trucks to be washed. Mickey had smashed a whole lot of grasshoppers on the front end of his truck and needed to get rid of them.

So Ginny - why isn't that dryer going around and around like it's supposed to?

After getting chores done we all did some Walmart shopping and then headed home.

Sunday night we bought fried chicken from Bob's grocery store in Townsend (it's really good) and had Ginny's potato salad and watermelon.

On Monday I had one of those days that are just as soon forgotten but birthdays seem to come every year no matter what. This year was special because we were able to celebrate with Mickey and Ginny.

We were going to go to dinner at the Big Bull in Winston which is just up the road from the campground. However, when we got there, they were overrun with a party of 42 (it isn't a very big place) so we decided to find someplace else. There is another bar and grill at Toston which is south of Townsend. We had never been there but decided to check it out.

The Bunkhouse is a truly Montana experience. It's a small bar with a pool table and a couple of slot machines. The drunk on-the-prowl female was trying to stay on her stool. The guys at the bar were trying to avoid her.  The bartender/grill cook was kept busy because she was the only one there.

The food was pretty good. I even got serenaded. Somebody spread the word that it was my birthday and this guy sitting at the bar said that after he finished eating he would sing happy birthday for me. I didn't get his name but he really did have a great voice. 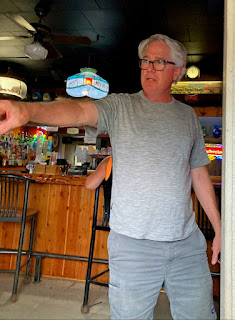 With all the smoke we've had some colorful sunrises and sunsets. 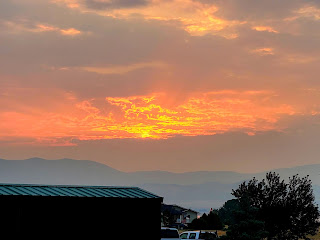 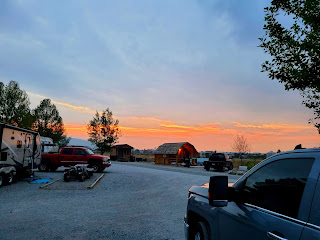 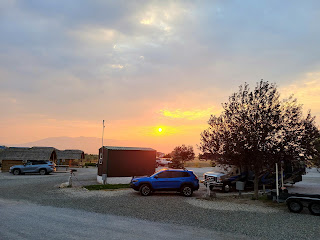 All too soon two weeks were gone and Mickey and Ginny were headed on to Sheridan for more adventures.