Dave Riley, who graduated with our class, is the Director of the Custer’s Last Stand Re-enactment.

Each year near or on the anniversary of the Battle of the Little Big Horn (June 25, 1876), a group of 200 dedicated people get together and perform a piece of history. 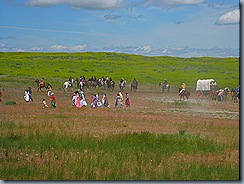 During the seven years that we lived in Billings not once did we go to this re-enactment. This year the Class of 1967 attended the battle.

There are actually two re-enactments and neither are at the actual battlefield. The one we attended is held six miles west of Hardin, MT. The other re-enactment is held by the Real Bird family on Indian land near the battlefield. Next time I want to attend this re-enactment. 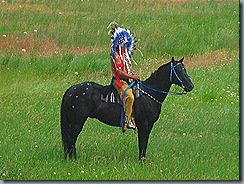 Probably no single event in American History continues to inspire and provoke controversy as does the Battle of the Little Bighorn. Was this a major victory for the Indians or was it the beginning of the end of their way of life? Probably some of both. 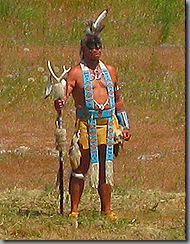 In 1964 notes written by Crow tribal historian Joe Medicine Crow who is a direct descent of Custer scout White Man Runs Him, were used to write the script for this re-enactment. He wanted to present the battle history from the Indian perspective. The reenactment continued each year in Crow Agency until 1973, when the production was cancelled because there had been a good deal of political unrest and the American Indian Movement had threatened violence to the reenactment. In 1990 when the Hardin Chamber of Commerce decided to revive the old script and bring back the show. 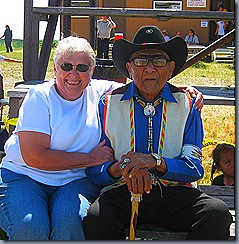 This is a picture of Joe Medicine Crow. He is 97 years old but still very active. He sang a song of praise for Custer at the beginning of the show. Wonder if he’s like to meet my 97 year old Aunt. Both of them are still going strong. He was really cute because he just had to look at the picture in the camera to make sure it was a good one. 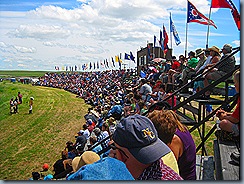 I’m sure most of you know about this battle where Custer and all his men were killed by the Lakota Sioux Indians. Some people say that Custer was an egotistical leader who would not listen to any of his men and others say he was a great tactical leader as proven by his victories during the Civil War. 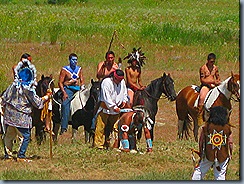 Custer was admitted to West Point in 1858, where he graduated last in his class. However, with the outbreak of the Civil War, all potential officers were needed, and Custer was called to serve with the Union Army. He fought at Gettysburg and also at Appomattox . He became the youngest major general, the youngest in the history of the US Army. After the Civil War he was asked to go west to help fight in the Indian Wars. 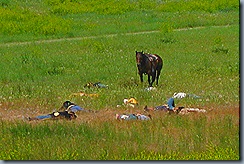 If you’ve never read anything about Custer, you might want to check in on him. He really was a very interesting and controversial individual. 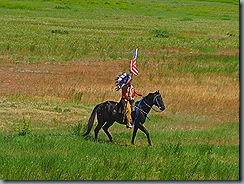 Some of the major players on the Indian side of the war were:

Sitting Bull - leader of the Hunkpapa band of the Teton Sioux Indians.
Crazy Horse - one of the four warrior chiefs of the Lakota.
Red Cloud - a great Lakota warrior

A fascinating time in American History.