AND SO TO SUMMARIZE

As long winded as I am, it’s hard for me to summarize anything. But here goes. 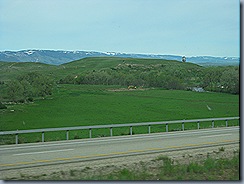 Coming back into Montana we were amazed at how green it is. You can sure tell they had lots of snow this winter and have lots of rain this spring.

We arrived back in Billings, MT last Saturday afternoon. I say back in Billings because this is where we were living when we retired and set out from as full timers in January of 2009. We are parked in our son’s driveway. We put in a 30 amp electrical outlet and use their shower and dishwasher when they’re at work. This used to be our house but Todd and his fiancé, Michaela, are renting it from us with the purpose of buying it in a couple of years. 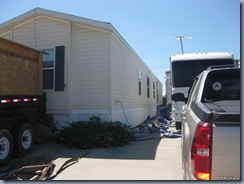 Last year’s tornado and hail storm really beat up the roof and it needed to be replaced. The roofers here in Billings are so busy that is just this week that they finally got around to our house. They were here at 8:00 in the morning and worked until 10:00 at night trying to get it done. Of course, we had rain and more rain and more rain and then threats of tornadoes and hail. It definitely took them longer than they had planned on. But it’s finished until the next storm. 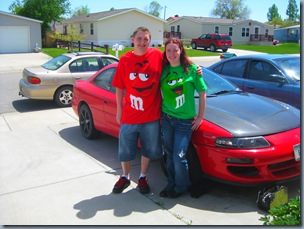 We spent some time with the kids just catching up on things. They are planning a wedding for next year and we wanted to see what all they have got going. We’ve done some necessary shopping because the larder was bare. Had friends over for dinner, have gone out with friends for dinner, have fed the kids a couple of times.

Had the brakes replaced on the Avalanche along with oil change and other maintenance type things. The coach goes in for it’s all around check up around the 21st.

The most excitement we’ve had is the threat of tornadoes. Staying in a motor home or mobile home is definitely not a smart choice so we grabbed the dogs and headed down to the parking garage. The kids and their dog, Zoey, joined us there along with a whole lot of other people. It was definitely a big party going on there. The police and security came by to check on us and make sure we were okay. 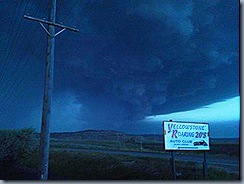 Had great views of the funnel clouds whirling through the air. Three tornadoes actually did touch down but they were out in the country and nobody was hurt. One farmer lost his silo and another rancher lost 130 head of cattle when the storm pushed them over a cliff. The water is so high that he couldn’t even get in to butcher them. The coyotes and whatever will be feasting for a long time.

(These pictures were taken by friends.) 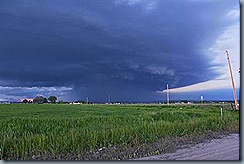 Roundup, MT has been under eight feet of flood water from the Musselshell River. They were just starting to recover from the flooding when this last storm went through and put them back under water again. Weather across our land has sure been a mess this spring. And it doesn’t seem to matter where you are.

But today we have sunshine and no rain until tonight. So I am going to lunch with one of my favorite people in the whole world, Janet. She and I worked together and I just love being with her.  While I’m at lunch, Jim is going to be scrubbing bugs off the house. 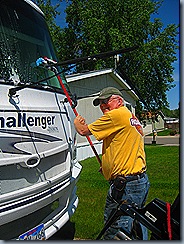