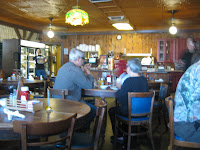 Jan and Bill told us about this place in Black Canyon, AZ. We had been carrying on about how good the apple pie was from Stouts in Willcox, AZ. Jan told us that these pies were even better.
Of course, on our way to the Sedona area Jim and I just had to stop and find out for ourselves. Jan had warned us to order our pie first but stupid us, we just couldn't listen to her. We ordered a hamburger and what a hamburger. After finishing the hamburger we knew we couldn't eat any pie.
We had wanted to have some apple pie so we could compare it with Stouts but they were out of apple. My next choice was blueberry but they were out of it, also. (Notice: Jim doesn't have a say in the kind of pie we're getting.) We both agreed that peach sounded good and we left with an entire pie. Had a piece later and it was fabulous. However, since it wasn't apple, it just wouldn't be fair to say that it was better than Stouts. But it was as good as. Thanks Jan. 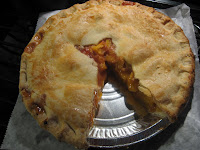