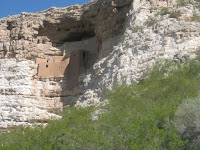 Montezuma was an Aztec ruler in Mexico and never visited Arizona - at least not as far as anybody knows. However, when the first Euro-American explorers (who were veterans of the Mexican-American War) saw these great cliff dwellings and large pueblos with standing walls, they didn't believe the local people had the knowledge or the ability to construct such imposing structures and so they attributed them to the Aztecs, whose magnificent ruins they had seen in Mexico. 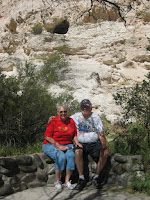 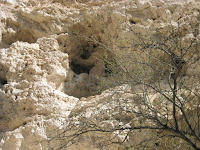 A popular Marine marching song of the time referred to the Halls of Montezuma or Mexico City, center of the Aztec world. These veterans felt the Aztec king had to have been somehow involved in building these dwellings so they called them Montezuma Castle.
The people who actually lived here, the Sinaguas, inhabited these dwellings at least a century before Montezuma was even born. 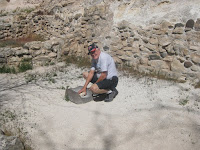 The Castle is built into a deep alcove with masonry rooms and a roof of sycamore beams, reeds, and clay. Entrance to most areas was usually through a hole in the roof and by using a ladder. It consisted of 19 rooms and would have housed 35 to 50 people. 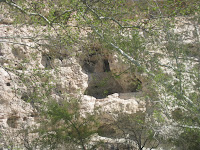 Nearby is Castle A, which had 45 to 50 rooms. (Castle A is not as well preserved as the Castle.) The Castle is cool in the summer and warm in the winter. The higher elevation gives some relief from mosquitoes and other vermin. 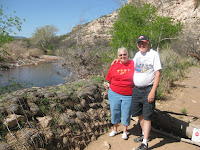 Montezuma Castle is located along Beaver Creek which was a necessary source of water for their survival and for watering their crops. The park service has made a diorama of what the Castle would have looked like when it was inhabited. 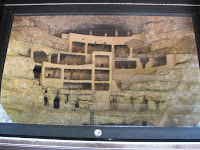 The Arizona Sycamore has been around for 63 million years. It has a ghostly white trunk and will reach heights of 80 feet and live at least 200 years. The Sinaguas used the tree for many of the 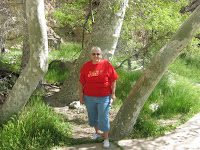 support beams still visible in Montezuma Castle. Some of these beams, which were hoisted 80 feet above the valley floor, are estimated to weigh over two tons. 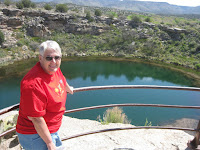 Montezuma Well is a natural limestone sinkhole. Water entering Montezuma Well is at a constant 74 degrees with a flow of over 1,400,000 gallons a day. The high levels of Carbon Dioxide (nearly 100 times higher than most natural water holes) means there are no fish in the well. But there is a unique aquatic community that has developed and four of these species are found nowhere else on earth. Algae thrive in the caron dioxide and provides food for amphipods (tiny shrimp like animals), leeches and night-swimming water scorpions. Scientists do not know where the consistently warm water in the Well comes from.
Posted by Jim and Sandie at 5:38 PM