I've mentioned before how much I enjoy the blog postings of my friend Jeri and this time she outdid herself. So I am going to borrow her blog post because I want it to be in my blog book when I have it printed up.
Of all the dogs she mentions in her post, I've met all of them except for Titan, the Great Dane. 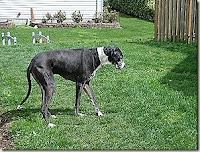 Therefore, they are all a part of our rving world and also a part of Scooter and Skittlez's life. Well maybe not Skittz because she's my coward.

Here's to you Duchess:

I started to title this Duchess' friends but then realized that these are really her acquaintances.
She'd like to make them all her friends but some just don't play the way she wants to play. She especially likes cats. She likes to chase them. However, she didn't even realize cats existed until last summer. As a then 8-year-old dog, she hadn't been exposed to any cats until then. That also marked the first time she didn't turn around and come right back to us when we called too. It was like a kid in love. She was in love with discovering them. About the same time she discovered squirrels. Thank goodness they can run up a tree and she can't. 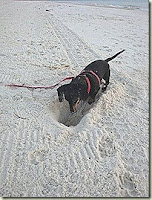 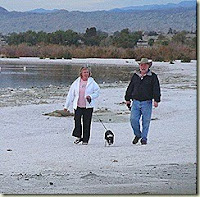 She also tries to be friends with the little dogs but that doesn't always work either especially if the little dog is a dachshund or even a Boston Terrier. They just kind of ignore her. Dachshunds are actually the alfa dog. Well, at least two out of the three she has met are. People would tend to think that the Doberman is the aggressor. Not so with many small breeds. She's actually afraid of some. And, if she's not afraid of them they are afraid of her. Two dachshunds, Scooter 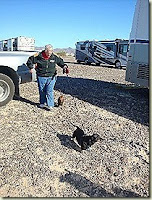 and Belle, totally ignore her but she certainly knows they are boss. Skittlez (the third) wants nothing to do with her . . . ever.
Many pets allow their RV families to travel with them. That's actually how it is and not the other way around. You've got to admit that in most cases coming back as an RV dog is really a dog's life. The ones we've met are certainly catered to, pampered, fed, loved, offered lots of travel, provided with shelter and they don't even have to work until retirement. They start out being retired. What a life!
We've met many on the road. We've even met Bella. Bella is a cat that allows Paul and Marsha to accompany her on her travels. 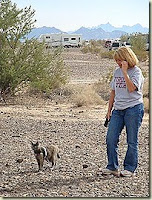 When she takes her daily walks she actually requires one to hold on to her leash so they don't get lost. Duchess doesn't play with Bella. We won't allow it. 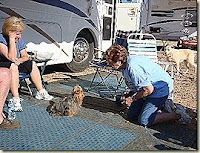 Some dogs travel and do tricks for their owners. Duchess knows how to sit if food is being offered. And, most of the time she knows what stay means. Those aren't the only words she knows. She knows hot dog, walk, eat, go and ready plus a few others that have a special meaning to her. Obviously, these weren't words we taught her. She learned the meaning of those pretty fast. As most pet owners know, some words have to be spelled at times so the pets won't know what we're talking about.
Along the route Duchess has attached herself to some real playmates. She's been able to romp in the fields and have a super good time. However, these dogs are about the same size . . . or bigger, as in Titan, a Great Dane. Now with Titan she does try to be the alfa dog. He's the male and she's the female. 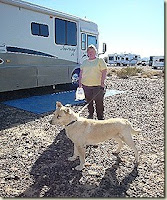 She also tried to pull the same trick with her other boyfriend, Parker. Parker let her get away with it also. 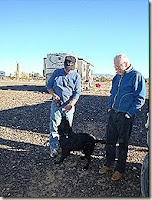 Duchess met Millie in Arizona but didn't get much of an opportunity to play. She's an active dog with lots of energy. However, she had just had surgery so playing wasn't such a good idea at the time.

I'm not quite sure what to make of the relationship with Bandit and Kora. The dogs seemed to tolerate each other well. After all, they did spend some time together, but we didn't get to see them running around and acting like foolish school kids. They actually seemed to ignore each other . . . or did I miss something? Well, Bandit lost a lot of food and snacks when Duchess visited her place. Most dogs lose their supply of treats when she's around. Their treats are always better than her own. 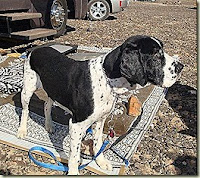 These are just a few of the RV friends who Duchess has met on the road this year. Even dogs have a group they look forward to seeing again as the seasons change. And, last year there was a whole other group of them. Who knows what new friends this year will bring.
Posted by Jim and Sandie at 4:59 PM