WHISKEY ROW WITH BORIS AND NATASHA 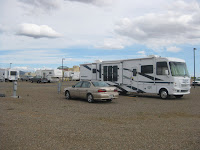 We got set up in the Fairgrounds RV Park in Prescott Valley, AZ. I knew that Boris & Natasha (Paul and Mary) were going to be in Prescott to have some work done on their Winnebago. I was able to get hold of Mary and we decided we'd get together for dinner. (Their user name on the Escapees Forum is Boris & Natasha and their motorhome is Bullwinkle.) 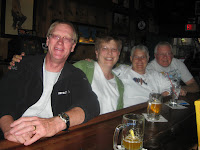 Another friend Paul - had told us we needed to visit Whisky Row in Prescott. We picked up the other Paul and Mary and headed to Prescott.

Whiskey Row is the 100 Block of South Montezuma Street so named because of the more than 40 saloons that once lined the streets. On July 14, 1900, The Row was totally destroyed by fire and rebuilt by 1905.

The Row was originally located a couple blocks west. It was moved because of the insistence of manhy of the local employers and wives. The patrons of The Tow had to cross a foot bridge over Granite Creek to return home and in the west season, some of the more sot would fall into this very shallow creek and drown. 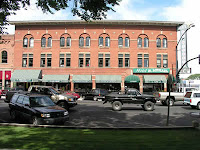 The Hotel St. Michael is decorated with gargoyles which allegedly represent images of local potiticans. Teddy Roosevelt, Zane Gray and Tom Mix are some of the more famous people who stayed at the hotel.

The Palace Saloon served libations to the likes of Doc Holiday and Wyatt Earp. When the fire destroyed The Row, the patrons of the Palace were able to save most of the liquor and the bar itself. They knew where their priorities lay. 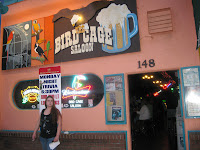 We decided to stop in The Bird Cage Saloon before we went to dinner. This place was really going strong and we found out it was trivia night. We had a wonderful time trying to answer the questions and carrying on. It's named The Bird Cage because of the marvelous collection of mounted birds displayed all over the saloon. 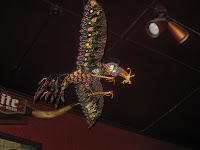