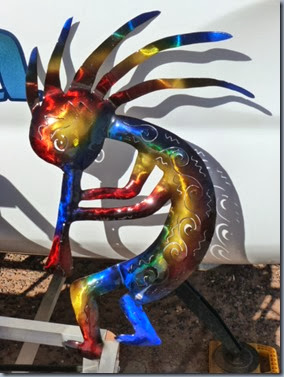 Nan wanted to know who Kokopelli is. Like Rick said, he can be dangerous to have around because he is a fertility deity. (I don’t really think I need to worry about it too much. But let me tell you, the money we could make.) Kokopelli is a Hopi word showing him as a humpbacked flute player who is a symbol of fertility, music, dance and mischief. The first known images of him appear on Hohokam pottery dated to sometime between 750 and 850 AD.

Donna asked about the beans in the grocery store picture. The majority of the packages were beans but there was also some pasta and rice. A lot of them I had never heard of before. 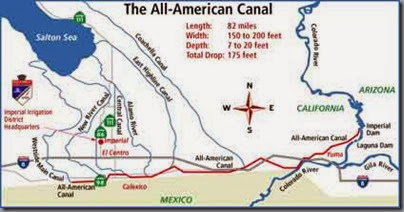 To get to the border you have to cross the American Canal which is an 80 mile long aqueduct. It diverts water from the Colorado River into the Imperial Valley and is it’s only water source. It is the largest irrigation canal in the world. It runs parallel to the Meixco/California border and has been called “the most dangerous body of water in the U.S. because over 500 people have drowned in the canal since 1997.

I really enjoy reading historical markers and learning more about what happened at that spot. This marker is at the Canal. 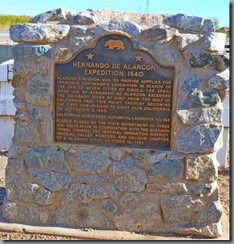 Hernando de Alarcon was a Spanish explorer in the Southwest in 1540. He was commander of a fleet that was supposed to meet up with the land expedition of Francisco Vasquez de Coronado. He sailed up the Gulf of California and proved that Lower California was a peninsula, not an island and he also discovered the Colorado River. He was the first non-Indian to sight Alta California and was well liked by the Indians because he treated them with respect.

It just amazes me that I stood at the point where this man explored almost 500 years ago.

Then I began to wonder why Pilot Knob was named as such and did anything happen here. I discovered that Pilot Knob is actually the peak that makes my sunrises so beautiful. It’s 876 feet high and Doug climbed to the top. It was named for its prominence as a landmark for riverboat traffic on the Colorado River. 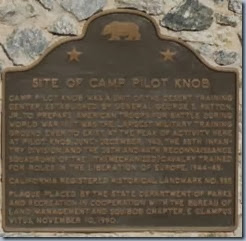 There is also an historical marker about Camp Pilot Knob. The camp was established in 1943 by General Patton to prepare American troops for battle during WWII. The only structures erected were temporary latrines and wood frame tents. There is nothing left of the camp.

There is always something I can learn no matter where we are.